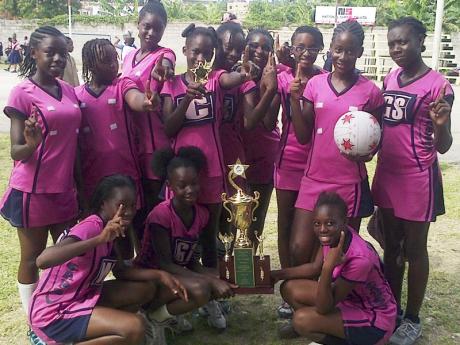 There seems to be no end in sight for Corinaldi Avenue Primary School's achievements in sports, as days after winning their second JPS Western Primary Schools' track and field title, they marched into the final of the St James Netball Association Under-12 League, with a 16-7 victory over Howard Cooke.

Chetwood Primary took third place over Anchovy Primary 15-14 in a close and exciting match, but while it was a real ding-dong battle in the play-off, the final was more one-sided, as the defending champions, led by Mickalia Hunter and Brianna Coleman, left little to chance.

They blew away their rivals from the opening centre pass and held a five-goal advantage at the end of the first quarter 6-1. Howard Cooke rallied in the second stanza, but it mattered little by half-time, as the eventual champions held a four-point lead at 8-4.

Young Coleman, who had an another outstanding match, was named Most Valuable Player (MVP) and Hunter, the leading goal scorer for the rampant Corinaldi. They defended their title with as much pride as they did winning it last year, securing back-to-back titles for the school to add to their long list of sporting achievements.

"These are the ones who make this final special because although we are a sponsored competition, our young stars can feel appreciated, thanks to the effort of these companies and individuals," said St James netball boss, Gina Haughton.