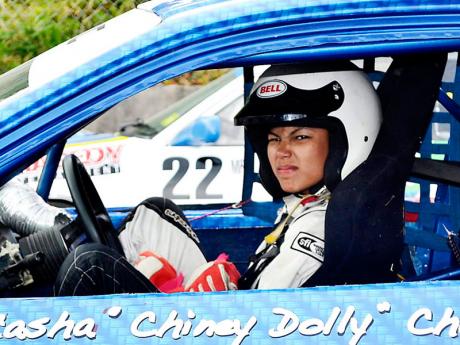 A year ago, she publicly expressed the desire to one day represent women and Jamaica at the Caribbean Motor Racing Championship (CMRC). Today, it is a dream come true for tough-talking Natasha Chang.

Prior to the Carnival of Speed meet at Dover Raceway in April, the petite Chang stressed that there wasn't a driver on the grid she feared. Among the points she wanted to prove was that women can be among the best in motorsport.

Now, the St Andrew High School graduate is among six drivers named to represent Jamaica at the first leg of the Seaboard Marine-sponsored CMRC meet, which will be held in Bushy Park, Barbados, on July 5 and 6. The others are Doug Gore (who will be driving his Audi TT), Kyle Gregg, Peter 'Zoom Zoom' Rae, Sebastien Rae, and new kid on the regional block, Vivian Mitchell.

"It's a new track and I have done my research. I am really excited and just hoping to do my best," said Chang.

A smiling Gore is not intimidated by any of the big names in the region, even though he said, "It is the first time that I have seen so many cars racing in the 'Big Juice Class'."

He plans to amass enough points so he can wrap up things in Jamaica early next year by the time the final leg is run.

The Montegonian, who won the championship last year, said he is looking forward to the challenge in Barbados, despite the home advantage of the Maloney boys, plus the father-and-son combination of Kevin and Kristian Jeffrey of Guyana, who are both in razor-sharp condition for the event.

"In the Big Juice Class, Guyana has six competitors, Barbados five, Jamaica and Trinidad two each. The Ford Focus of Roger Mayer is very fast. Our intention, though, is to leave

there with the most points," said Gore.

Based on his current form, Jamaica's Vivian Mitchell may be the man to upset the apple cart. Mitchell won seven of eight races at Dover in May.

Peter Rae, CRMC's second runner-up in 2012, has styled this trip as the 'Reggae Racers Invasion'.

"The expectation is to fly the Reggae Racers' flag high and mighty. The Bushy Park facility is an awesome track, based on what I saw at the BBC Top Gear event, which featured Lewis Hamilton," he said.