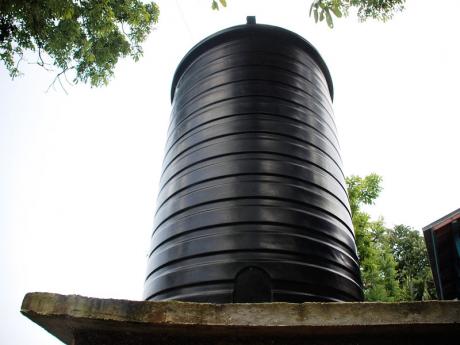 An empty rainwater storage bin sits in the centre of the lower Auldayr community.-File

The harvesting of rainwater, which is to become a standard design feature in real-estate developments, whether a single home or residential complex, will add to the cost of construction projects, developers say.

Those costs appear, in some circumstances, more likely to be borne by home buyers, according to local developers, as well as the top supplier of homes in Jamaica, the National Housing Trust (NHT).

Construction project designs must include the means for harvesting rainwater in order to receive planning approval, under a new push for sustainable use of water.

The directive, which is yet to be approved by Cabinet, has come from the Ministry of Water, Land, Environment and Climate Change (MWLCC), which also says individual builders, too, are required to make provisions to catch and store rainwater "especially where piped water or a public supply is not available".

The ministry is also encouraging the installation of rainwater catchments - which can be different vessels capable of storing water - in homes and developments already built.

So far, NHT has included rainwater harvesting in its development plans for Perth Phase One in Manchester and its Balaclava development in St Elizabeth.

The state housing developer has only serviced lots in these locations, which means lot owners will have to construct the water harvesting systems themselves.

"The cost of such systems may range from $250,000 to $700,000, which will have to be added to the cost of building their homes," the NHT said in its emailed response to Sunday Business queries.

Carvel Stewart, president of the Incorporated Masterbuilders Association of Jamaica (IMAJ), said, though the move to harvest water has advantages, it will add costs to developments.

"Those items of cost will definitely be passed on to the purchaser," said Stewart.

The National Rainwater Harvesting Policy, first announced in November 2013, is on its way to Cabinet for approval, says MWLCC permanent secretary Alwyn Hayles. NEPA will, in short order, begin enforcement, he said.

"We anticipate going to Cabinet within a month or so before it is formally adopted in the building and planning regulations, and then the local authorities and NEPA would then be able to enforce it," Hayles told Sunday Business.

The policy will further be open for public consultation, Hayles said.

"One of the things we want to look at as well is to be able to use rainwater inside facilities, for example, to flush toilets, which would mean you would separate the plumbing for that usage from that of potable water - but that would take some more discussions," the permanent secretary said.

NEPA says the policy has been drafted into parish development orders.

"The agency has, through its consulting and approval process, been incorporating rainwater harvesting as a condition of approval for developments, especially where piped water or a public supply is not available," NEPA told Sunday Business.

The agency has also been working with its different arms of Government, including the National Spatial Unit and Applications Management Division, to have drafted policies to address and encourage water harvesting within existing and proposed developments, NEPA said.