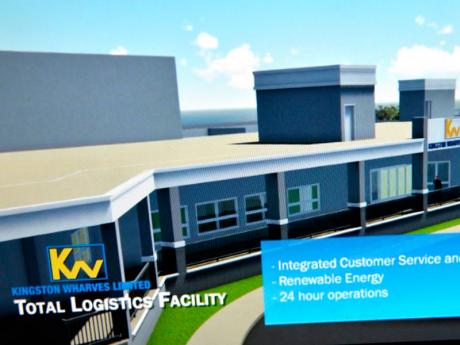 An image of a section of the new Kingston Wharves logistics facility as shown in a videotape presentation at the company's annual general meeting in downtown Kingston on Wednesday.

Kingston Wharves Limited will be investing US$70 million over the next five years to expand its operations in its quest to become what it said is the world's leading multipurpose port, consequent to it being granted free-zone status.

Chairman and chief executive officer of Kingston Wharves, Grantley Stephenson, said the development will be funded through a mix of debt and equity.

He said agreement to grant the zone status took longer than they would have liked because it was subject to scrutiny by several government departments, including Jamaica Customs, the Ministry of Transport, the National Works Agency, the Kingston and St Andrew Corporation, the National Environment and Planning Agency and the Ministry of Industry, Investment and Commerce.

The company has now received all the approvals required for the process, Stephenson told shareholders at the company's annual general meeting in Kingston on Wednesday.

Marketing executive at Kingston Wharves, Catherine Carter, who narrated a videotape presentation at the meeting, said the strategic development plan in their vision to become the world's leading multipurpose port will be executed in three phases.

In phase one, Kingston Wharves will move up its value chain and become a lead logistics provider, fully streamlining its warehousing operations with offerings of modular warehouse spaces and operating an increasingly productive terminal and functioning free zone.

Within the next three months, Carter said, the company will extend its port boundary and relocate the first of three on-dock warehouses to a newly refurbished facility.

Thereafter, and within 24 months, Kingston Wharves will demolish on-dock warehouses and other buildings within it existing boundary as well as reposition its domestic and transhipment car parks.

Carter said those activities will pave the way for the introduction of the company's total logistics complex with accompanying modular warehouses.

She said the logistics complex will be an ultra-modern facility, purposefully built and efficiently laid out. The facility will integrate Kingston Wharves' customer service with processing by Jamaica Customs and is envisioned to operate on a 24-hour basis.

"Through this complex, we will allow our customers to reshape their supply chain and realise long-term competitive advantage," Carter said.

Having reclaimed its on-dock open storage space, the company will purchase Post-Panamax cranes to increase its efficiency in handling current Panamax vessels and ensure its readiness for the Post-Panamax classes expected after the widening of the Panama Canal.

In phase two of the development, Kingston Wharves will continue its preparations for the Post-Panamax era by optimising the port's layout, offering what Carter said are "guaranteed productivity and responsiveness" and ultimately achieve annual throughput of one-million twenty-foot equivalent units or TEUs per annum.

That phase of expansion will see Kingston Wharves undertaking deep-water dredging to increase ships' draft to the 15 to 24 metres required by Post-Panamax vessels.

The dredging work will be followed by additional berth-face redevelopment, installation of new gantry crane rails, and a complete renovation of the company's container yard.

In the third phase of this development, Kingston Wharves will undertake demand-driven expansion, maintain performance to First World standards, and define the concept of port centred logistics.

"Our logistics and warehousing complex will rival the best in class throughout the region and drive cargo through the Kingston Wharves terminal," Carter said.

"We will build on our reputation in the global automobile transhipment market to systematically increase our penetration and reach as an auto transhipment hub," she added.

Stephenson told the meeting that the establishment of the free zone will entail the closure of some roads in the area, including Third Street, Newport West.

He said that part of the funding for the development is expected to come from Kingston Wharves' access to funds recoverable from the Port Authority of Jamaica, which requires the company to allocate 16 per cent of wharfage collected to a special reserve.

In its annual report for 2013, Kingston Wharves said the reserve, created in 1976, can only be used for retroactive labour costs and special expenditure in accordance with directives from the Port Authority. The company may use interest earned on investments representing the reserve in the furtherance of its business.