Yield no ground to gays 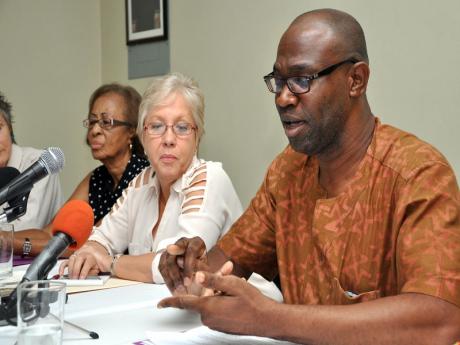 Ivan Cruickshank, programme manager of Caribbean Vulnerable Communities (CVC) Coalition, addresses a press briefing in Kingston last Thursday. Listening are CVC Coalition Executive Director Carolyn Gomes (centre) and June Carr. The coalition has come under fire for fronting for the gay lobby, but its officials have labelled that characterisation as false.-Jermaine Barnaby/Photographer

Homosexuality has been a reality for centuries. The Book of Leviticus, which makes reference to it, was written circa 1400 BC. When I was growing up, it was looked upon with scorn and those found indulging in it became outcasts.

Much has changed since that time. The gay lifestyle has gained acceptability and even respectability in many parts of the world. Jamaica itself has become much less intolerant than we are so frequently accused of being.

Libertarianism has gathered pace, especially since the end of the Cold War. The 'coming out' of some prominent movie and recording stars idolised by many Jamaicans and, more recently, the endorsement of same-sex unions by President Obama, himself an idol for many Jamaicans, have accelerated that change.

Local lobby groups have become increasingly open and strident in their advocacy. They are very astute and their campaign strategy has been well executed. Initially, it was pitched as a public-health issue. It argued that the removal of the buggery law was critical to reducing the spread of HIV/AIDS, as infected persons would be more willing to seek treatment.

In more recent times, it has been pitched as a human-rights issue - the individual's right to choose, provided it does not impair the rights of others. On this basis, it has secured the support of an array of human-rights groups, including some here in Jamaica.

The hostility, including criminalisation and acts of violence towards homosexuals in many countries, has unintentionally provided them with their most powerful tool. The United Nations, the multinational body that defines, promotes and monitors human rights throughout the world, stayed clear of the issue until 1994 when the UN Human Rights Committee ruled in the case of Toonen v Australia that sexual orientation was included in the anti-discrimination provisions under the International Covenant on Civil and Political Rights. This, however, fell short of a persuasive General Assembly declaration.

The random violence meted out to gay people and the severe punishment, including execution carried out under the laws of some countries, caused the issue to be placed at the fore of the UN World Conference on Racism, Racial Discrimination, Xenophobia and Related Intolerance held in South Africa in 2001.

In 2003, Brazil, backed by 18 European countries as well as Canada, presented a resolution to the UN Social and Economic Council seeking to affirm sexual orientation as a protected right. When it became evident that there was not sufficient support for its approval, it was quietly deferred.

In 2008, sixty-six member countries sought and obtained a similar declaration by the General Assembly. CARICOM countries withheld their position, with the exception of St Lucia that opposed it. UN General Assembly declarations are non-binding on member states and have no legal effect in international law, but they do carry political weight in international and bilateral relations.

In most of the countries where MSM are permitted, this has been so for decades and even centuries. Only about a dozen countries have decriminalised within the last 10 years. Same-sex unions and marriages, however, are of more recent vintage. Norway was the first to legalise same-sex unions in 1993 and the Netherlands the first to institute same-sex marriages in 2001. Of the 28 countries where same-sex marriage is allowed, 14 have introduced the enabling law in the last five years.

Jamaica at a crossroads

Jamaica finds itself at a crossroads, some may even say tipping point. The pressure to repeal the buggery law will intensify. The pressure to go much further to legalise same-sex unions, including marriage, is emerging, as evidenced from the Gleaner editorial of June 4. The major countries of the world will continue to seek by example and persuasion to nudge us in that direction.

Times have indeed changed. Libertarian permissiveness, 'live and let live', has taken hold. Who would have thought it possible in England for the current leaders of both the Labour Party and Liberal Democrats to proclaim themselves to be atheists without suicidal political consequences? Barney Frank declared his homosexuality in 1987 and proceeded to win re-election to the US Congress 12 times. Iceland, Belgium, Luxembourg and the province of Ontario have all elected openly gay heads of government.

The Jamaican people cannot allow themselves to be forced into submission either out of fear or ambivalence. That fear is real. Many business owners and professionals are afraid to speak out because it could mean loss of business. Some pastors and church leaders are afraid because it could mean loss of membership or throw the church into controversy. No one really knows the reach and clout of the gay movement, despite all the anecdotal stuff I hear, but it is human nature to be fearful of the unknown.

We are being outsmarted by the gay lobby. Those of us who are fundamentally opposed to same-sex unions because of the damage it will do to our already fragile social structure need to also get smart. The punishment prescribed for those engaged in MSM activity continues to be a red rag to a bull and a rallying cause for the same-sex agenda. Seven countries retain the death penalty for male homosexuality. Many others apply stiff punishment, including life imprisonment. In our case, the punishment can be up to 10 years' imprisonment, although it is hardly ever enforced. It has stigmatised the conservative agenda and caused it to be associated with repression. We cannot win if we stay on that battlefield and we don't have to win every battle in order to win the war.

As I have previously stated, I am not opposed to the repeal of the buggery law. It is, in my view, a violation of the individual's right to privacy. But I believe that a line must be drawn lest we are pushed into the chasm into which some countries have plunged.

There are sections of our Constitution that are protected by deep entrenchment, meaning that only the people, by way of a referendum, can change those provisions. We must seriously consider including the definition of marriage in those provisions.

Number of countries where legally permitted (already in effect or imminent)

Number of countries where forbidden by law