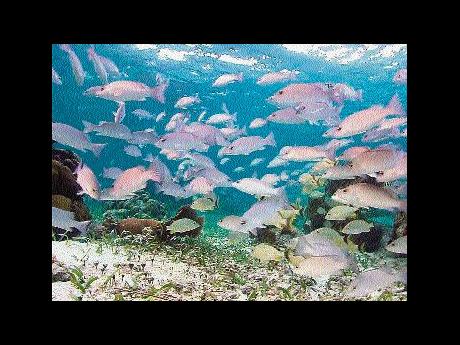 A shoal of snappers.

In 2009, arrangements got under way for the establishment of selected coastal areas for protection from fishing around Jamaica. So what was this all about?

If we understand that Jamaica is rated as one of the most overfished areas (except for offshore conch) in the Western Atlantic Ocean and in the Caribbean in particular, we should expect that something should be done to correct this situation. What characterised this situation? High number of fishers around the island, lots of fishing canoes, lots of fishing beaches, thousands of fish pots in just about every coastal area, incredibly small fish sizes, very low fish catches, much searching, but no fishes in some areas, rampant fish-pot theft in some south coast areas, the list goes on.

Jamaica's fisheries have a history of poor enforcement, not because of lack of will, but less-than-adequate funding, shortage of staff and a lack of appreciation for the small, but important contribution of local fisheries to the country's food security. Just lobster alone contributes three per cent by weight of all catches annually, but 15 per cent by value of all landings over each of the last five years. Similarly, conch, from the small industrial fishery offshore, is doing very well over the last 20-odd years, a quiet success story by itself. But more about that another time.

So, what is the situation with our other fisheries right now? It is perhaps not as bad as people think. Last estimates show some increases in annual landings, but the quality of what is landed had slowly declined over the last 20 years such that it is dominated by trash fish that have lower value than species like snappers and groupers.

So what is being done about the situation? The Fisheries Division, with guidance from the Fisheries Advisory Board and its members drawn from the industry, other government agencies and the University of the West Indies (UWI), having accepted that other forms of management had not done very well, decided to introduce what many other countries have successfully tried to save their fisheries.

After much discussion and review, they introduced protected areas called fish sanctuaries (also called special protected fishery conservation areas). These areas, in several other countries, have been astonishingly successful in restoring depleted fisheries over a period of time. In the Mediterranean, fish catches in areas nearby have increased by 70 per cent. In the Philippines, catches have gone up 60 per cent in some areas. Right here in the Caribbean, the fish sanctuaries in St Lucia have resulted in a resurgence of the reef fisheries and a 150 per cent increase in the average size of fish taken in fish pots set on their reefs after just five years of protection.

So, how many fish sanctuaries do we have here in Jamaica? Since 2009, thirteen of them have been introduced around the island and one offshore as well. Three (Three Bays, Salt Island and Galleon Harbour) are found in the Portland Bight (Old Harbour Bay) area, St Catherine and Clarendon; Galleon Bay, St Elizabeth; Bluefields, Westmoreland; Discovery Bay, St Ann; Montego Bay sanctuary adjoining the Marine Park, St James; Orange Bay, Hanover; Boscobel and Oracabessa, St Mary, and the newest one at South Cay, on Pedro Bank. These join two small much older areas, Bowden Bay, St Thomas, and part of Bogue Island lagoon, St James. Three new areas are being considered as sanctuaries: East Polink Point, St Catherine; San San Bay, Portland; and the coast off the St Thomas wetlands (southwest of Morant Point).

So, how do they work? Being protected from fishing of all types, fish, as well as species like lobster, conch crabs and so on, survive to slowly grow and reproduce and their young spread outwards from the sanctuary, effectively slowly re-seeding the adjoining areas around the sanctuary that can still be fished. That way, everyone is happy after a few years, provided that the boundaries are observed so that no fishing occurs in the sanctuary for several years.

No fishing is allowed in those areas, and the areas are each managed by groups of fishers who are responsible to the Fisheries Division and also to their members for the successful operation of the sanctuaries.

The boundaries of the sanctuaries are marked by special high-visibility floats such that fishers will be able to easily avoid intrusion. So, are they working? If the Oracabessa fish sanctuary in St Mary is anything to judge by, scientific studies there from 2010 to early 2014 showed a 570 per cent increase in fish biomass (fish weight), a 200 per cent increase in parrot fish, a 1,000 per cent increase in doctor fish, a 150 per cent reduction in harmful smothering algae, and a 23 per cent rise in live coral cover. These are stunning figures.

Overall, fishes were more numerous and larger in average size compared to the start of the sanctuary four years ago. So that particular fish sanctuary is working and working well. Are all the other sanctuaries working as well? We don't know for sure, but some, like the one at Bluefields, Westmoreland, are also doing well. But further monitoring studies are being carried out as we continue to critically observe the workings of several others.

Some fish sanctuaries are now threatened by a reduction of supporting funds from the annual queen conch cess, but this issue should be clarified soon, so that the sanctuaries can continue to operate smoothly and properly.

If you have a suitable small shallow reef area with coral and seagrass, not close to polluting influences, and a group of fishers willing to operate and enforce the boundaries far into the future, perhaps you, too, can, with time, have a fish sanctuary near your area. But you would need to contact the Fisheries Division for their comments and assessment.

So, can it be said that fish sanctuaries are a good thing for fisheries in combination with other measures? Thus far, a resounding, yes!

Karl Aiken, PhD, is chair of the Fish Sanctuaries Network of Jamaica and senior lecturer in zoology at UWI, Mona. Email feedback to columns@gleanerjm.com.