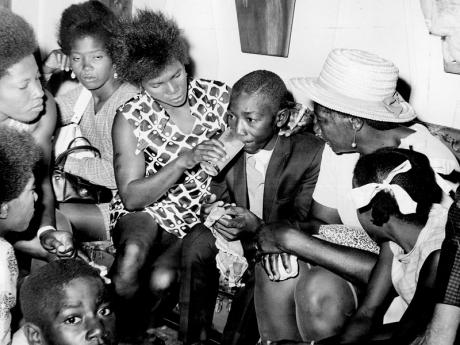 Jason Whyte drinks a glass of orange juice, held for him by his half-sister, Grace Reddicks, in the VIP Lounge at the Palisadoes Airport. Jason's mother, Eva Whyte, (in hat), his sisters and his brother complete the family group.-File 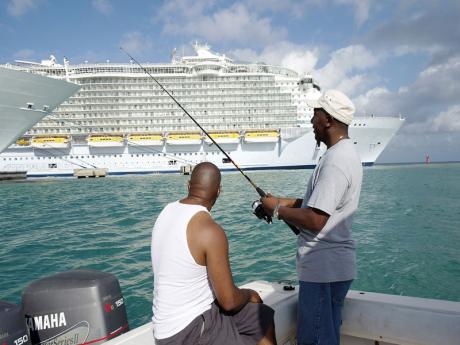 Despite being lost at sea as a youngster, Jason still loves the sea with a passion and he still goes fishing at 5:30 every morning while he's in Jamaica.-Jason Whyte photos 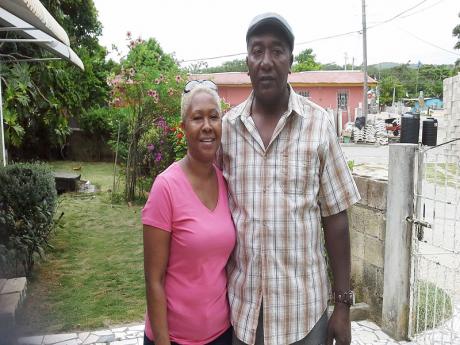 Jason and his wife, Phillipa, relaxing while on vacation in Trelawny,
1
2
3

Tears of joy washed the face of Eva Whyte as the TACA Airlines flight made its final stop on the tarmac of the then Palisadoes International Airport.

Arriving on the flight from Panama was Jason Whyte, Eva's 14-year-old son, who was lost at sea without a trace for 17 brutally hopeless days.

The boy was rescued by a passing German freight ship on its way to Panama, where he was briefly hospitalised and returned to Jamaica on this joy-filled flight.

The story of his disappearance had plunged Jamaica in deep despair in June 1971, and when news of the rescue blasted across the airwaves, the nation breathed a collective sigh of relief.

Jason's ordeal began at the seaside fishing community of Rock near Falmouth some three weeks earlier, when he left with his 68-year-old father on a fishing trip in a small canoe.

The boat's engine failed and the father-and-son team made a brave but unsuccessful effort to row the boat back to shore. Instead, the canoe drifted further out to deep sea and was lost.

An alarm was raised in the Trelawny community and rescue teams went in search of the Whytes, repeatedly, without luck. It later turned out that Jason's dad died of an apparent heart attack during the horror at sea, and the frightened teenager had to make the painful decision to throw his dad's body overboard to lighten the weight of the boat. While Jason's friends at school were facing end-of-year exams, Jason was fighting for his life, eating raw fish and drinking rainwater to stay alive, his skin peeling away in the stabbing heat of the Caribbean Sea.

Eva Whyte had journeyed with four daughters and one son from Falmouth to Kingston to welcome, hug and kiss her beloved Jason, and although it was Saturday, June 19, Eva was dressed in her 'Sunday best' at the airport's VIP lounge, wiping the tears from her eyes.

"The Lord preserved and kept him alive," she whispered, making no effort to disguise her extreme happiness at seeing Jason right before her eyes.

Fast-forward to June 2014, 43 years later this week, and Jason Whyte is a real-life survivor. He was in Jamaica on vacation last week and his story is an extraordinary testament to hope, courage, perseverance, strategy, risk calculation and prayer.

Jason is now 57 years old and living in Ontario, Canada, where he recently shared his experience that is indelibly etched in the Jamaican memory bank.

It was obvious that reliving the ordeal was a difficult and painful exercise for Jason. There were periods of long pauses, silence, reflection, deep thought on soul-wrenching issues, but he eventually relaxed and told his story.

DAVE R: Jason, it's been 43 years since you were lost at sea. Do the memories of your childhood ordeal ever go away?

JASON W: It is not some something I sit around and think about all the time, but yes, sometimes the memories do come back. It never completely goes away.

What parts do you remember the most?

The most painful part of the ordeal and the part I remember most was losing my father, William Whyte. He was an old man and was lost at sea for about four days with no food and no water when he died. He also was very worried about taking care of me. Looking back at it now, the stress of the unending nightmare was more than an old man could bear.

How did it feel to have to bury your dad at sea?

It was the most difficult thing I have ever had to do. I feel that there was a superior being there guiding me and telling me what to do. I think it was more than me there. Bear in mind I was 14 years old and I had no previous knowledge of somebody dying. I feel that I was being guided. Dad was in the boat for about two days after he died and his skin started falling off, and I was led to put the body overboard. It was not planned, it just happened that way.

Your life was saved because of a clever move. You waved frantically at a passing ship and by chance a sailor was looking through his telescope, saw you and thought it unusual for a boat that small to be so far out at sea. Tell me more about the rescue.

Looking back, I remember seeing other ships that passed that I waved at but they were too far away. This one was not too far and I tied a piece of cloth to a stick and waved frantically at the ship. I have no idea where I even got the energy from to do this, but this time my prayers were answered. I saw the boat turning around and I was incredibly happy. It pulled up alongside me and using hand gesticulations, a crew member was asking me if I could swim. They were speaking German which, obviously, I didn't understand. They threw a rope to me. I understood that. I held on to it for life. I was pulled from the boat and someone helped me to climb a ladder up to the ship. I was unbelievably weak and made it on-board by a miracle.

The treatment in Panama was excellent. Everyone was extremely kind, especially the nurses and a few Jamaicans, including a Jamaican diplomat there. I stayed in a hospital there for about two days and then I returned home.

The welcome is cloudy in my memory but I remember it being a very warm reception. I was so happy to be home and to see family and friends once again that I don't recall much of the rest of the welcome. I remember, though, that the then prime minister, Hugh Shearer, had sent a lovely thank you letter to the captain and the crew of the German vessel, Elde Oldendorft.

When you arrived back home, the government said they were looking at ways to help you in life. Did this in fact happen?

As a child I didn't know anything about those arrangements. The older ones in the family would have been handling that.

Have you ever been back to sea fishing?

Fishing is my passion and it will always be. I just went fishing this morning and caught a few jacks, barracuda and snapper. However, I've never been far out to deep sea on a small boat. Even in Canada where I live I go fishing because I love it more than any other sport. When I go out deep-sea fishing I catch marlin, tuna, kingfish and mahi mahi. Whenever I am in Jamaica I go fishing every single morning at 5:30 from Rock, my hometown fishing village.

How did the experience change your life?

That's a tough question. I led a simple, happy life before the ordeal happened. Growing up, I loved woodcarving, flying kites, spinning gigs and fishing. I still lead a simple, happy life, but now I see life as a valuable treasure and a precious gift. When you have been through what I have, every minute of life is a blessing.

What are you doing with yourself now?

I have been living in Windsor, Ontario, for more than 30 years, where I am a happily married man. My wife Phillipa and I are crazy about each other. We have four children, two boys and two girls. I am semi-retired and I still do some furniture and cabinet-making. My wife is Jamaican, too, from Montego Bay, and our big delight is coming back home to Jamaica on vacation as much as we can, but especially at Christmas time.

What advice do you have for anyone who is in a life-threatening challenge?

While there is life there is always hope. I never gave up and nobody should. And always try to do the right thing. I see young people now going about hurting other people with no feeling or thought for the pain they bring to others. Be satisfied with what you have and don't envy others for what they have, because most times you have no idea how they came by their possessions.