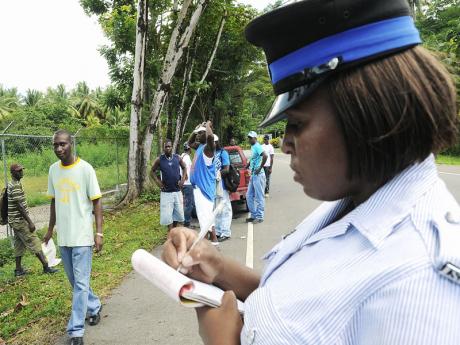 A policewoman writing up a traffic ticket in Hope Bay, Portland.-File

All Jamaicans use the roadways whether as pedestrians, drivers, or passengers, so while it will undoubtedly be some time before this law is passed, the act will affect the lives of all Jamaicans. As such, here is another important legislation for readers to take note of.

More stringent conditions are also now attached to a learner's permit. For instance, a person with a learner's permit will be restricted from driving on the road after 10 p.m. and must not drive on roads where the maximum speed limit is 80kph or more. This means that learner drivers will not be able to use the toll roads. Where a person graduates from a learner's permit to a driver's licence, the restrictions highlighted before carry over for the first year of the life of the new licence.

The consequences for driving without a learner's permit or driver's licence are draconian: 14 demerit points will be awarded and a fine of up to $40,000, or one month's imprisonment. Driving contrary to the terms of a learner's permit or failing to comply with the conditions of the first year of licence, for example, driving on a highway, will result in one demerit point and a fine of $6,000, if paid at the approved collectorate; however, one could face a maximum fine of $15,000, or a 15-day prison stint in lieu of payment, if one decides to challenge the matter in court.

The act introduces different categories of driver's licences: Classes A, B, and C. Class A pertains to motorcycles and B to private motor vehicles (that is, motor vehicles used by the average person for private, not for commercial purposes). Unique to Class C is the requirement that an applicant for a driver's licence to drive a public passenger vehicle must first be a holder of a Class B licence for a minimum of three years. This is a useful addition as no person who is a fairly new driver should be allowed to drive public passenger vehicles.

Notice of Change of residence

Where the holder of a driver's licence changes his place of residence, he will be required, under the act to notify the authorities of his new address within 14 days after such change and to pay a prescribed fee. It is baffling to me that a fee would be required for me to advise the authorities of my change of address, but I must remind myself that Jamaica is broke, and that rights all perceived wrongs. The penalty for breaching this section is $2,000.

Use of electronic devices while driving

The act also seeks to tackle the vexing issue of persons driving with one hand on the steering wheel while grasping a cell phone to their ears with the other. Under the act, it is prohibited for a person to drive a motor vehicle while using any electronic communications device, whether by holding the device in one hand or both, or by any other part of the body. Electronic communications devices that form part of the fixture of the vehicle or are affixed to the driver as a hands-free device are expressly excluded from the prohibition.

Among the numerous offences listed under the act, the following will be of particular importance to readers. Exceeding the speed limit will see fines moving from a band of $2,000 to $6,000 to a band of $6,000 to $15,000, if paid at a collectorate; or a maximum band of $15,000 to $45,000 (or a term of imprisonment in lieu of payment) if one pursues the matter through the courts and loses.

The number of Rules of the Road under the act has increased dramatically, and some of the new rules attract sturdy fines. For instance, wilfully or unnecessarily hindering, preventing, or interrupting the free flow of vehicular traffic attracts a sturdy fine of $13,000.

The penalties for disobeying the current rules have also increased dramatically, in some instances, by a whopping 300 per cent. For example, failing to allow passage to an overtaking vehicle will move from a fine of $5,000 to $20,000. Dangerous driving, which is largely discretionary and often charged along with various other breaches of the Road Traffic Act, will now attract a maximum penalty of $250,000 (or a term in prison in lieu of payment) in addition to suspension of one's driver's licence.

Fines of the magnitude mentioned before create a breeding ground for corruption. If the act is allowed to pass as is, as a society, we should brace for the wind of bribery and perversion cases that will howl through the not-so-hallowed corridors of the courts.