To catch a farm thief! 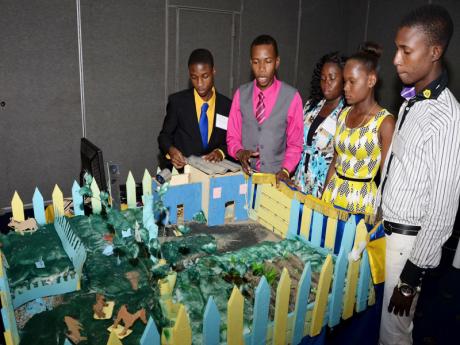 As farmers continue to suffer at the hands of thieves who annually reap way more than $5 billion of produce they do not sow, a group of students from the Waterford High School, St Catherine, is offering a possible solution to the age-old problem.

So impressive was the students' Science and Environmental Club electronic anti-praedial larceny device at this year's Katalyxt Youth Innovators' Competition, that the company has committed to helping the school develop a working model.

"Katalyxt will partner with us so that we can build out the technology and start a business," science teacher Tera Rankine told The Sunday Gleaner after the school's entry in the 2014 competition scored overwhelmingly with the judges.

In addition to taking first place, Waterford High also copped the 'Big Idea!' award, introduced this year and for which organiser's had demanded that "the product/service must be useful and provide a solution to a daily problem in addition to being demand-oriented. That is, the product must be responsive to a market demand and fill an existing gap in the market".

After being encouraged by Rankine to enter the competition, the students set about researching the issue of praedial larceny in Jamaica - challenges and solutions.

They started by designing a scale model of a livestock and crop farm before going on to build on research that pointed to the need for an electronic solution to complement the usual precautionary measures employed in securing livestock and crops.

"What separates our solution from earlier ones is the emphasis on invisibility, reducing the chances of the thieves being able to sabotage the system because they are not even aware of its presence," said one of the students, Shenel Allen.

Another student, Kemo Anderson, explained the basics of the system without divulging any trade secrets.

It involves the placement of underground sensors close to crops, animal pens, or coops. These sensors are programmed to respond to pressure in much the same way as a land mine, which is usually paired with an explosive device.

"If an intruder steps on the mine, activating it, this immediately triggers a motion-sensing camera, which begins to record activity in the area. There is an application, which allows for the transmission of a video to the farmer's cellular phone, and then a bright light and loud-sounding alarm comes on," said Anderson.

The students explained that the system is designed to prevent the theft of farm produce, and in the process, would identify the would-be criminal, providing clear evidence for the police. The idea is to prevent the theft without the farmers coming into contact with the thieves, while giving the police evidence that can be useful in catching the criminals.

Katalyxt was sufficiently impressed with the idea, but the students are aware that much more work needs to be done to fine-tune and enhance their design.