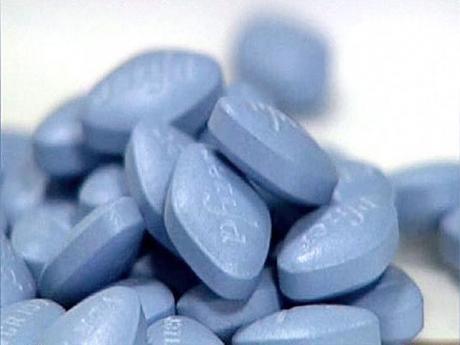 Q: My doctor has recently put me on Viagra pills, with pretty good results. But just one thing is worrying me.

My girlfriend is very fair-skinned, particularly over her breasts. And after I have taken Viagra, when I look at them they seem to me to be blue. Is this OK, Doc?

A: It's nothing to worry about. One of the best-known side effects of Viagra is the curious 'blue vision' that it produces in quite a lot of men.

That is temporary, and as far as we know, it is harmless. However, it might be worth asking your own doctor whether you should reduce the dosage.

Q: Dear Doc, when I was in my mid-teens, I was raped by a 'friend of mine' who was 27. He didn't use a condom. It was not a nice feeling, especially because I have my Christian values - I was hoping to keep my virginity for my future husband. The matter was sorted out, as it went to the police and I got a medical check out.

Later on, I realised that there was a piece of elongated flesh from the clitoris, or a little below that. It was long and narrow, and I was worried. So I went to a female doctor and got a full physical and she told me that I was OK.

However, she did diagnose a yeast infection, and she treated me for this. But since then, it has returned repeatedly.

I must tell you that the 'flesh' keeps getting shorter, like it is going back to normal. It is not as long as it was before.

The doctor said that she has a gynaecologist who could cut it off, but it would be expensive, and I do not have the money to do this surgery.

Could you tell me if something is wrong with me? Could I perhaps have some sort of STD or STI - or even worse a virus?

A: I am sorry to hear about your horrible ordeal. It is a vile crime, and many persons do not realise how devastating it is for a woman.

Having said that, I don't think that your present problems have anything to do with the rape.

As far as the yeast infection is concerned, any woman who keeps on getting this infection should have a check-up from a doctor, including a test for diabetes. That is because of the fact that yeasts love living in a sweet environment, such as found in someone who has diabetes.

If the doctor finds that you are not diabetic, then I suggest a very long course of anti-fungal treatment - around two months. You should use vaginal tablets and also a cream containing one of the following medications:

Your doctor may feel that it is worthwhile prescribing some oral capsules called fluconazole.

Also, if you have a current sexual partner, you should insist that he uses the anti-yeast cream, to avoid any danger of reinfecting you during sex.

As it relates to this 'projection of flesh', my guess is that it you have noticed that it is just one of your outer vaginal 'lips'. These two 'lips', also known as the 'labia majora', are often of differing sizes. It is quite common for one of them to be several inches long. That can be distressing for a woman, and from what you say, I think it is almost certain that your doctor believes that the 'projection' is just one of your labia.

She is clearly not worried about it, therefore, my advice to you is to leave it alone, and try to ignore it. It is not caused from the rape in your teenage years. And there is a chance that it will shrink to the point that you scarcely notice it. Good luck.

Q: I am 38 years old and I have not seen my period for five months.

Could this be an 'early menopause'?

A: Yes, as long as you are not pregnant! But I think you should see a doctor, to find out if you have any other possible causes for your absent menses.

Q: Misguidedly, I did a circumcision operation in America 25 years ago. Now I am having trouble with sex, Doctor, because the area of the scar is 'raised' and very sensitive.

Sometimes, I have to stop halfway through and take a rest. My partner does not like that. What can I do? Have another operation?

A: Unfortunately, circumcision does sometimes result in a raised and rather sensitive scar, which is called a 'keloid'.

It would be possible for a surgeon to remove this scarred tissue, but there is a danger that a new scar might form on your penis. So instead, what I suggest is that, whenever you have sex, you use a lot of lubrication both on your shaft and on your partner's vagina. There are a lot of good sex lubricants available on the Net, such as Liquid Silk, Yes, Pjur, and the long-established K-Y Jelly.

An alternative would be to wear a condom during sex, because that may reduce your discomfort.

Q: My boyfriend travels the world, coming back to Kingston once a month. This year, it seems like he is only in Jamaica during the last days of my menses.

Is it OK to have sex at that time, Doc?

A: Yes, certainly - provided that neither of you minds a slight evidence of blood loss.

But please bear in mind that it is just possible to get pregnant during the last days of the period. So be careful.

Q: I am a 25-year-old male. When I was 24, I had unprotected sex once with this girl. I later found out that she had a bladder infection at the time.

I noticed a lot of itching on my foreskin during the same period that we had sex. So there is no doubt that the bad itching was caused by whatever she had.

One night soon after, I fell asleep with some semen on my foreskin. The next day, to my astonishment, the itching never returned!

So, could semen be curative?

A: There is no evidence in medical literature that semen cures anything. Also, it is most unlikely that your itching had anything to do with this woman's 'bladder infection'.

An itchy foreskin is usually due to either an allergy or to a fungal infection.