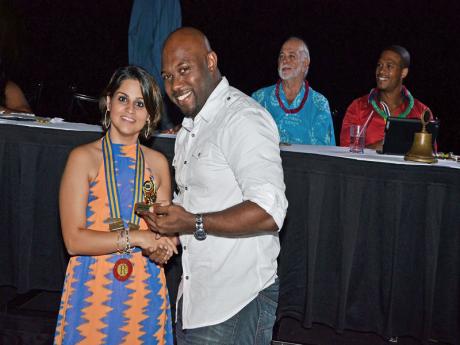 Outgoing District Rotaract Representative Julie Ramchandani presents the Rotaractor of the Year award to Donair Wilmouth of the New Kingston Rotaract Club at the closing ceremony of the Rotaract District Conference at the Hilton Rose Hall on Saturday, June 14.- Photos by Janet Silvera 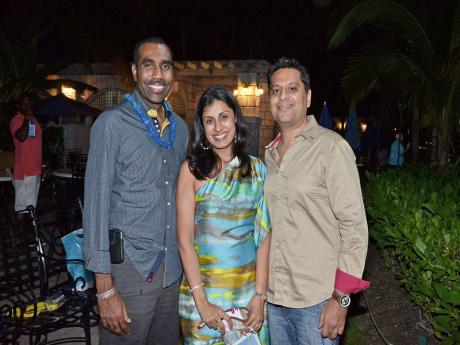 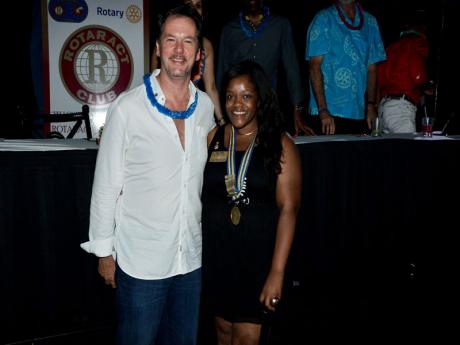 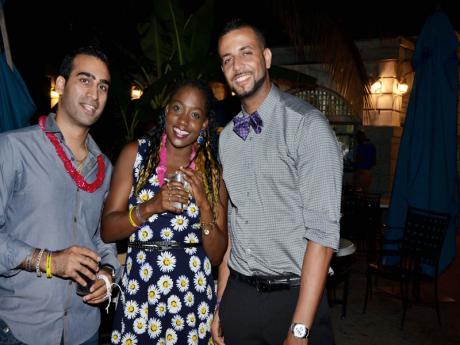 Trudy Williams, of the Rotaract New Kingston club, is sandwiched by Manish Uttamchandani (left) of Providenciales, Turks and Caicos, and Matthew Seales of the Cayman Islands. - Photos by Janet Silvera. 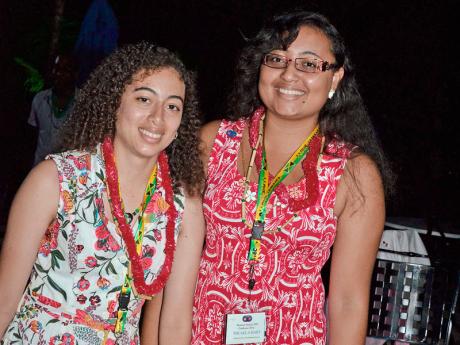 WESTERN BUREAU:Nine islands, 134 attendees, a brave young man's marriage proposal, and an industrious Jamaican (Julie Ramchandani), whose Rotaract District flight landed safely at the Hilton Rose Hall in Montego Bay, after a year as a pilot.

The scene was the closing ceremony of the 2014 Rotaract District Conference, which was literally overrun by district members from The Bahamas, British Virgin Islands, Cayman, Haiti, Jamaica, St Maarten and St Martin, US Virgin Islands, Turks and Caicos, and Kingston, Jamaica.

Themed as a Hawaiian luau, no grass skirts were apparent, however, Cayman Islands-based Rotaractor, Glenn Duran, took giant steps at

he event, surprising his better half Lauren Langlois with a marriage proposal and a fabulous diamond rock.

But the night belonged to Ramchandani, who led the team for 2013-2014 and, after introducing seven new Rotaract clubs to District 7020, she also executed a District project under the theme 'Building our Future with Vision', where 1,300 children across the district were given eye-care testing and fitted with prescription glasses. After such a success, she could easily hand over the reigns to Elisia Lake from the Rotaract Club of St Maarten Sunrise.