Not in his best interest 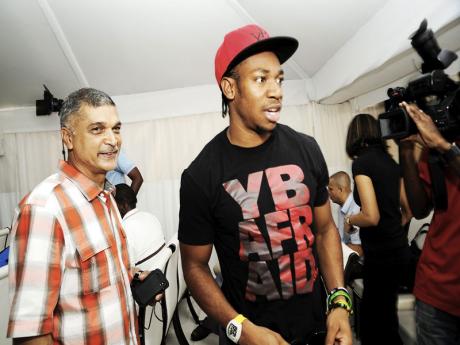 Many of Jamaica's big stars will undoubtedly turn up, but track and field fans in Glasgow will have to do without sprinting superstars Yohan Blake and Usain Bolt as next month's Commonwealth Games, set for the Scotland, looks set to miss two of the sport's biggest names.

Bolt is still working his way back after injury troubles earlier this year while Blake and his team of handlers - after serious and lengthy consideration - have decided that competing at the Commonwealth Games, at this point, was not in his best interest.

Blake, who is coming off an injury-ravaged season himself - spoiled by hamstring worries in April 2013 - was said to be seriously considering competing at the July 23 - August 3 event, with his manager Cubie Seegobin confirming that Glasgow was at one point a target for the 24-year-old.

However, Seegobin told The Sunday Gleaner that after careful assessment primarily between himself, the athlete and coach Glen Mills, it has been determined that the best option would be to skip the Commonwealth Games and focus on regaining his best form with high-level competition, for what will be a high-pressure and busy 2015-2017 triple championships spell.

Blake, along with his poster-boy clubmate Bolt, were not entered to compete at this week's Jamaica Athletics Administrative Association/Supreme Ventures Limited National Senior Cham-pionships, which serves as a trial for selecting teams to a number of events this year, including the Commonwealth Games.

Organisers noted that all of the island's big names with the exception of Bolt and Blake had submitted entries to compete.

There was optimism from members of the organising committee that Blake, who has this season already competed internationally at the Manchester Great City Games (150m), the IAAF World Relays (4x200m, 4x100m) and the New York adidas Grand Prix (100m) would be entered before last Friday's 4 p.m. deadline.

There has also been suggestions that Bolt, who is yet to feature this year after also suffering an injury setback earlier this year, may submit a medical exemption application, which would allow him to skip the trials but compete in Glasgow once his fitness is proven ahead of the competition.

But the word so far is that the 27-year-old double world record holder and Olympic and world champion, like Blake, will not feature in Glasgow.

Meanwhile, Seegobin confirmed that Blake will not be turning out at the trials this week and will also certainly miss the Commonwealth Games next month.

"His (Blake's) entire team seriously considered him competing at the trials and Commonwealth Games, it was something that we were looking at for a long time but in the end, the team decided that they would do what's in the best interest of the athlete," Seegobin said, ruling out any suggestion that the decision may have been based on Blake not being in a good enough physical condition.

"He's (Blake) healthy, you saw what he did in Nassau and how he has looked since coming back, but he is looking forward to the next three years, so this year is about getting him back in the saddle and getting him back to running really fast again," Seegobin added, referring to Blake's 19.00 seconds anchor leg split that led Jamaica to a world record 1:18.63 run in the 4x200m at the IAAF World Relays.

"We only have about seven to eight races scheduled for him this year, although he is ready and able to run very fast like he did in Nassau at the World Relays."

Blake is set to feature on the circuit at the Lausanne Diamond League stop on July 3, where he will line up in the 200m, the Glasgow Grand Prix on July 11-12 and the London Anniversary Games on July 20.