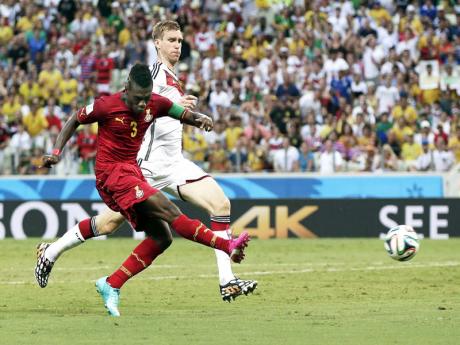 Ghana's Asamoah Gyan scores his team's second goal during the Group G World Cup match against Germany at the Arena Castelao in Fortaleza, Brazil, yesterday. The game ended 2-2. At right is Germany's Per Mertesacker.-AP

FORTALEZA, Brazil (AP):Miroslav Klose rescued a point for Germany, and equalled the World Cup scoring record in the process.

Germany were held to an entertaining 2-2 draw by Ghana yesterday and needed Klose's second-half equaliser to avoid another second-game letdown that has plagued the team in recent tournaments.

"Ghana really threw everything they had at us. It was a very animated match. Both teams had many chances, and many counterattacks," Germany coach Joachim Loew said. "That's not how the match was planned, but that's how it turned out."

Klose scored the equaliser in the 71st minute, less than two minutes after coming on as a substitute, when a corner by Toni Kroos was flicked to the far post by Benedikt Hoewedes and the striker slid in to knock the ball into the roof of the net.

Mario Goetze had put Germany ahead in the 51st, but Ghana equalised three minutes later through André Ayew.

Ghana captain Asamoah Gyan then put the Africans ahead in the 63rd, only to see Klose cancel out his goal.

The 36-year-old Klose is in his fourth World Cup and had been level with former Germany striker Gerd Mueller on 14 goals. Ronaldo also scored his 15th against Ghana, in a 3-0 win in 2006 in Germany.

With coach Joachim Loew preferring to play with a "false nine" system without a striker, Klose sat out Germany's opening 4-0 rout of Portugal. But with Ghana threatening to put a damper on Germany's hope of winning the group, Loew turned to his veteran, who delivered again.

The result revived Ghana's hopes of progressing after their opening 2-1 loss to the United States.

"It was a good competitive game. We did our best and we had many other chances that could have produced goals," Ghana coach James Appiah said. "Ghanaians have a strong mentality when it comes to football, to fight to the end no matter what is happening. Playing against Germany is difficult, especially when you are a goal down. So you have to have the right players with the right mentality on the pitch."

Germany took the lead when Thomas Müeller sent a dipping cross towards Goetze, who attempted a header but the ball bounced off his left knee into the net.

Ayew rose between Per Mertesacker and Shkodran Mustafi to head the equaliser inside the far post from a cross from Harrison Affu.