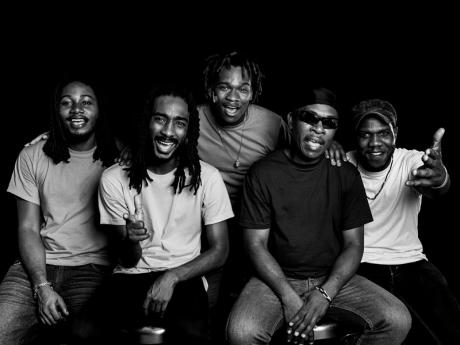 Raging Fyah's sophomore album, Destiny, is now available on iTunes. Following the launch of the album last Tuesday, the 11-track offering was made available from a variety of online retailers, while the physical CD in Digipak can be purchased from Derrick Harriott Music Store, Music Mart, The Book Shop at the Norman Manley International Airport and 9 Springvale Avenue.

Destiny is also available as an exclusive box set offer, along with Ragin Fyah's previous offering, Judgement Day. There is even a special cut of Destiny on vinyl for the Japan market.

The group is made up of five outstanding musicians - Anthony Watson, Courtland White, Demar Gayle, Delroy Hamilton, and Kumar Bent - who have set out to rekindle the flame of positive music. The group continues to receive great support, as demonstrated at the launch, where an eclectic crowd filled Chris Gayle's Triple Century Sports Bar and Lounge.

Raging Fyah delivered a moving performance, which included material from Judgement Day, alongside singles from Destiny, including Jah Glory, the album's lead single. Describing Jah Glory, Delroy Hamilton said the single was "a roots-rock reggae track produced by Frankie Music, with lyrics compelling everyone to give Jah the glory, despite trying times".

With the many women present at the launch, it was not surprising that Far Away, the 'missing you' ballad from Judgement Day, earned the most rapturous response of the evening. The crowd became engrossed in the performance, and the usual whistles and shouts accompanied most, if not all the musical offerings.

The release of Destiny marks a justifiably proud second chapter in the musical journey of a committed and passionate group.