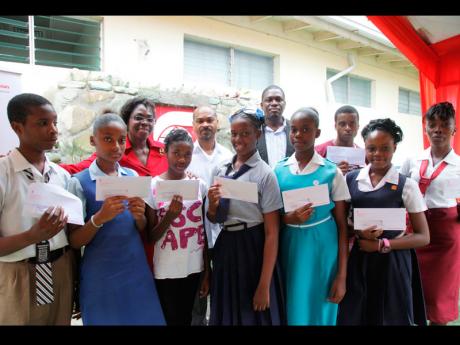 Shorna-Kaye Woollery's mother cried when she got the news last week.

Heather Woollery had been distressed about her child's condition, but these tears were tears of joy.

She had just received a call from ScotiaFoundation that Shorna-Kaye would be one of the eight teenagers to benefit from the ScotiaFoundation's Scoliosis and Spine Care programme.

According to Woollery, Shorna-Kaye had been diagnosed with 50 per cent right thoracic curvature of the spine, a severe case of scoliosis.

The intervention by Scotiabank would relieve the stress of sourcing the seemingly unattainable finances necessary to make the condition right. It was even more poignant since Woollery had initially been turned down. But after much crying and pleading to God, the situation has now been miraculously reversed.

Scoliosis is a condition that occurs most often during the growth spurt just before puberty, where the spine curves either extremely to the right or to the left. The condition is hereditary, and it is estimated that 90,000 Jamaicans, including Olympian Usain Bolt, are affected by the condition, with varying degrees of severity. The condition causes physical pain and can at times lead to paralysis, breathing difficulty, and emotional and psychological challenges.

In Shorna-Kaye's case, her back was twisted and she had a dragging walk caused by one leg being longer than the other. The most viable option, corrective surgery that involves the fusing of the vertebrae in the spine, has now been made possible through the ScotiaFoundation Scoliosis and Spine Care programme.

The programme has been in operation since 2006 and has affected the lives of almost 60 teenagers at a cost of $18.2 million.

"Teenagers are impressionable and sensitive and should not have to endure the emotional and psychological strain scoliosis brings. In a number of cases, there is bullying and teasing. We are happy to be able to rectify some of that and help them rebuild their confidence," said Joylene Griffiths Irving, executive director of the ScotiaFoundation.

The young people to benefit from this year's $3 million intervention will spend the summer recovering from corrective surgery and be ready to resume school in September. Surgeries can last up to 12 hours and involve the use of metal rods attached to the spine by screws, hooks, and wires to hold the spine in place. Costs for surgery are prohibitive at more than $600,000 per person.

They were selected by a team at the Kingston Public Hospital from a waiting list of almost 400.

Twelve-year-old Shorna-Kaye, who came second in her class and fourth in her grade, is looking forward to returning to McGrath High School with her corrected spine in September. She is happy that ScotiaFoundation can help her with the operation.