US heartbreak! Americans wilt at end in Amazon heat 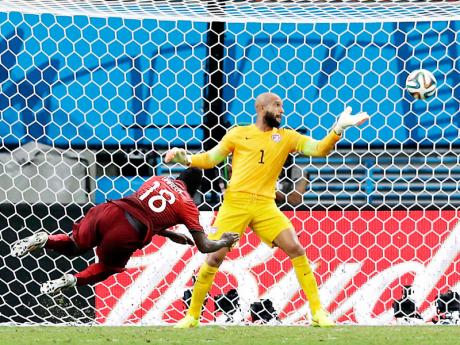 They were less than 30 seconds away. The Americans were about to romp into the round of 16 at the World Cup, about to walk off with their first come-from-behind win at soccer's showcase. About to advance with a game to spare. About to win consecutive World Cup games for the first time since 1930.

But they wilted in the Amazon heat and humidity.

Silvestre Varela's goal on a diving header off Cristiano Ronaldo's cross on the game's last play gave Portugal a 2-2 tie yesterday on an exhausting night in the rainforest capital.

"We had one foot in the door," US goalkeeper Tim Howard said.

Now the Americans may need at least a point on Thursday against Germany to advance to the knockout stage. They could advance with a loss, depending on the result of the Portugal-Ghana game that will be played simultaneously.

US coach Jurgen Klinsmann called it "a little bit of a bummer".

"Obviously, we're disappointed. But at the end of the day, you've got to look at the positives: We got a point," American captain Clint Dempsey said. "We put in a good performance. I thought we played better than the last game. I thought we moved the ball better. I thought we created more chances. Just unlucky."

Germany and the Americans both have four points, but the Germans have a better goal difference. Ghana, which lost 2-1 to the U.S., have one point, as does Portugal.

Both the Americans and Germans would advance with a draw. Klinsmann dismissed the notion that he would discuss the match ahead of time with Germany coach Joachim Loew, his assistant on his homeland's 2006 World Cup team.

The US fell behind early, when Geoff Cameron's wayward clearance gifted Nani a fifth-minute goal.

But Jermaine Jones' exquisite 28-yard shot tucked inside the far post in the 64th minute and Dempsey's goal off his stomach in the 86th, his second of the tournament and fourth of his World Cup career, put the Americans ahead 2-1.

A screaming, pro-American majority in the crowd of 40,123 was ready to party late into the steamy night.

Then Varela beat Cameron to the cross, deflating the red, white and blue-clad fans.

"It was unfortunate," Klinsmann said. "An amazing game, amazing performance by our guys. Nothing more that you can ask for. We just go it the tougher way. We've got to go and we've got to beat Germany, get a result against Germany, and that's what we're going to do."

Just like four years ago, the Americans relied on a late push. But they couldn't sustain it.

Now it's onto Recife. Nothing is decided.

"We are capable to surprise even more teams in this tournament," Klinsmann said.

They could move on. Or after all this, they could be sent home.

Meanwhile, Twice now, Belgium has relied on a late revival boosted by stamina and their bench to turn desperate situations around. Yesterday, it was teenager Divock Origi who turned a listless Belgian performance into a late 1-0 win over Russia, enough to qualify for the next round.

Belgium barely contained a reinvigorated Russia for most of the match, yet struck with a blistering late spurt of class and opportunism to turn a bad situation into a wild, fist-pumping celebration for coach Marc Wilmots and his team in the 88th minute.

"Why were we good in last 10 minutes? Simple, the others were tired," said Wilmots. "The Russians were so tired they looked at their feet, and it offered us chances to counter."