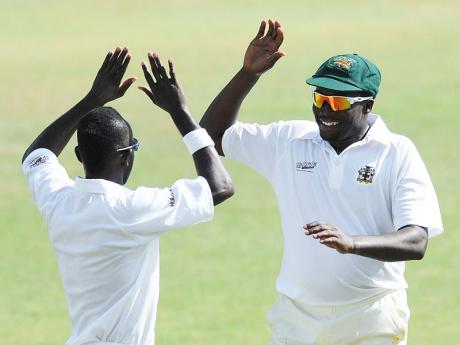 Odean Brown (right) and Nikita Miller celebrating the fall of a wicket during the regional competition. - Ricardo Makyn/Staff Photographer

Odean Brown is looking forward to making his debut in the Caribbean Premier League (CPL).

The Jamaican leg-spinner, who was drafted by defending champions Jamaica Tallawahs earlier this year, has been battling an injury for the past three seasons.

However, having done surgery late last year, the 32-year-old is hoping to make a successful comeback.

"This is my first (CPL) season and with all the injuries I have had I am happy to finally have a shot," said Brown.

"It is even better as well, as I will be playing with the Jamaica Tallawahs."

Brown, who since his surgery has played one competitive match for a Jamaica Select XI against New Zealand last month, was the Tallawah's 13th and final pick during the second annual player draft.

He was picked by new Tallawahs coach, Mickey Authur, as support for off-spinner Muttiah Muralitharan and left-arm spinner Nikita Miller.

For a number of years, Brown and Miller have formed a lethal combination for Jamaica in regional competitions and were integral in the team putting claim to a record fifth straight hold on the regional first-class title.

Young leg-spinner Akeem Dewar, who had a lukewarm season with the Combined Campuses and Colleges this year, was not drafted.

The Tallawahs will play Darren Sammy's Antigua Hawksbills in their opening match on July 13 at the National Stadium in Grenada.

This is two days after the tournament opener between Guyana Amazon Warriors and Antigua Hawksbills, on July 11 at the same venue.