Bartoli: No regrets for post-Wimbledon retirement 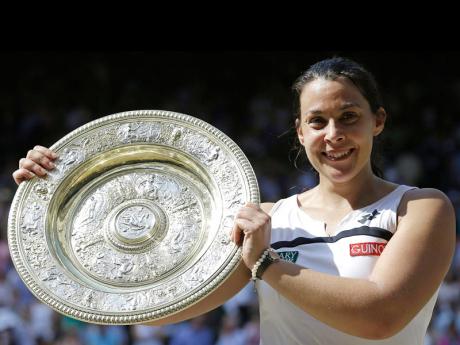 Marion Bartoli of France smiles as she holds the trophy after winning the women's singles final at the All England Lawn Tennis Championships in Wimbledon last year. - AP

There they were, spread across the practice courts on the afternoon before Wimbledon begins: past Grand Slam champions or former No. ones - Novak Djokovic, Stan Wawrinka, Petra Kvitova, Caroline Wozniacki - and some who aspire to such heights: Eugenie Bouchard, Milos Raonic and Ernests Gulbis.

Djokovic, the 2011 winner at the All England Club and last year's runner-up to Andy Murray, teasingly challenged Wozniacki to hit a serve into a white plastic bag he was holding (she missed, then joked about "too much pressure"). Kvitova tested her heavily wrapped upper right leg. Bouchard, a semi-finalist at the last two majors, worked on volleying.

Notably absent was 2013 champion Marion Bartoli, the first woman in 17 years who declined to try to defend her Wimbledon title. Still, Bartoli held the traditional reigning champion's pre-tournament news conference yesterday, when she explained she has zero lingering doubts about retiring at age 28, less than two months after winning her only Grand Slam trophy - and also showed precisely why she quit the sport.

Tugging down the collar of her white top to reveal strips of blue tape providing support for her right shoulder, Bartoli said: "Literally, I can't even lift my arm every morning. It was the same last year and didn't improve. ... So definitely no regrets at all."

She has moved on to other pursuits - TV commentary, launching a shoe line and designing jewelry.

Ah, but Bartoli will always have her Wimbledon championship, and she takes great pride in that.

"Sometimes, people ask me, 'Who are you?' I just say, 'I'm the Wimbledon champion.' It just speaks by itself," she said. "I don't even need to mention my name."

When the All England Club's suit-and-tie-clad moderator began yesterday's proceedings by intoning, "I have great pleasure in introducing Marion Bartoli, our current ladies' singles champion," the Frenchwoman pumped her fists and smiled broadly.

During the question-and-answer session, Bartoli noted no fewer than three times that she won last year's tournament without dropping a set. She revealed that every couple of days, she'll log on to YouTube and watch a video of the 101 mph (163 kph) ace she hit - a spray of chalk dust proving it was in - to close her victory over Sabine Lisicki in the final.

Her coach for that magical fortnight was Amelie Mauresmo, a former No. 1 and two-time major champion who recently was hired by Murray as he attempts to win a second consecutive title at Wimbledon.

Murray, the first British man in 77 years to earn the championship at the All England Club, will have the honour of opening play today on Centre Court, facing Belgium's David Goffin.

"I believe if I play my best tennis, I'll give myself a chance of doing well here, putting myself in a position to win the tournament," the No. 3-seeded Murray said yesterday. "But you can't start off slowly in these tournaments. You need to try and be on it from the first match. I'll be ready for tomorrow."

Other top men in action today are the No. 1-seeded Djokovic, 2010 runner-up Tomas Berdych and No. 11 Grigor Dimitrov, who faces American qualifier Ryan Harrison. Women on the schedule include five-time champion Venus Williams, No. 2 Li Na, 2012 runner-up Agnieszka Radwanska, and No. 8 Victoria Azarenka, who is coming off a left foot injury.

The last woman to skip a title defence at Wimbledon was Steffi Graf in 1997, shortly after knee surgery.

Bartoli left tennis primarily because of "too many question marks" about her health. But there are other parts of life on tour she does not feel nostalgic about.

"I don't miss every morning having to wake up and not being able to lift my arm; having my whole body terribly sore; having to travel; pack and unpack; all the practice time you have to book; make sure you're just having your schedule ready," she said.