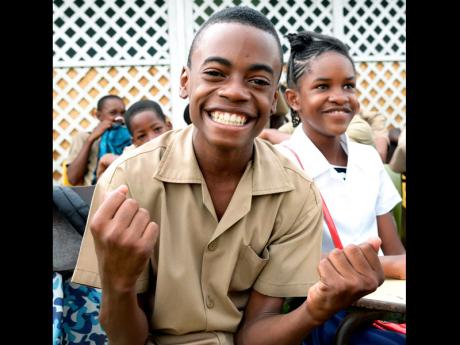 Joel Samuels, a student at Lluidas Vale Primary School in St Catherine, was all smiles after he was told that he was awarded a place at Kingston College. - Ian Allen/Photographer

Many educators at primary schools in the rural areas of central Jamaica are lamenting that they are not receiving the level of parental support that is needed to augment what is being taught in schools.

The educators said this was being reflected in the students' performance in the Grade Six Achievement Test (GSAT).

Uvelyn Barrett-Rose, principal of the Lluidas Vale Primary School located in the St Catherine farming community, noted that the schools in the area are suffering from a lack of parental support, and this was an issue that needs to be rectified.

"The parents don't believe in doing extra lessons, so we hardly have that. And, like other schools who would do summer school, we don't have summer school here," Barrett-Rose said.

She explained that the extra lessons provided during holidays and evening classes are usually helpful in students' overall performance on the GSAT papers.

Latishia Bygrave, grade-six teacher at the Kellits Primary School in northern Clarendon, said she has a similar challenge in preparing students for GSAT.

She said very often students do not exhibit that drive to do well in the exams, and this is because of a lack of proper parenting.

"They don't set this standard and sometimes you realise that the feedback has a lot to do with parenting," she said.

The story was similar at the Kentish All-Age School, where the grade-six teacher, Venessa Davis-Johnson, explained that for the three students she prepared to sit GSAT this year, there was little to no reinforcement at home.

"We can do so much and no more here at school," she stressed, using homework as a clear area in which parents' monitoring could have made a difference in the results.

However, Morva Rhule, principal of the Garden Hill Primary School in St Catherine, said the experience at that school was vastly different and credited the involvement of parents for the successes at that institution.

Of the 27 students who sat the exams there, Rhule said more than 12 managed to average more than 80 per cent, with one student boasting a 97 per cent average.

"We had the parents behind us. Whenever we wanted them, they were always willing to come out," she added, while also lauding her teachers for always engaging parents about their children.

But despite the challenges that are plaguing some of these schools, the educators agree that progress is being made.

Sharing a story of one student who could not afford textbooks, Barrett-Rose said despite it all, he managed to get into his first choice, Kingston College.

"He would come to school early, he would borrow somebody's textbook and he would write out all of the exercises so when the teacher says, 'Turn to a page,' he would have it prepared," she said, explaining that that student, Joel Samuels, demonstrated the sort of tenacity many students in these poor rural communities have.