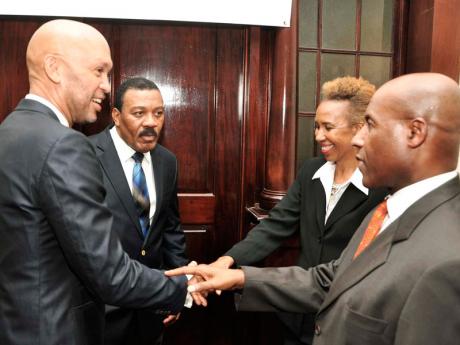 Members of the Jamaica Labour Party's (JLP) Economic Advisory Council, Patrick Casserly (left), Colin Williams (second left), Fayval Williams and Aubyn Hill, gather for a brief talk among themselves after they were presented to the public by JLP leader Andrew Holness during a press conference at the Office of the Leader of the Opposition in St Andrew yesterday. - Jermaine Barnaby/Photographer

Chair of the Economic Advisory Council of the Jamaica Labour Party (JLP), Aubyn Hill, is insisting that despite his acceptance of the new role, he is not politically aligned.

Hill said yesterday that his decision to answer the call to contribute to the formulation of economic and growth policies for the party was born out of nationalism.

"I am very sure that many people are going to say that I am a registered Labourite, or even worse. I am not at the moment at all," Hill told The Gleaner shortly after being announced by Opposition Leader Andrew Holness as head of the council.

"The leader asked me, and I thought I am at this stage in my life where I could help, and I am quite happy to help because I believe there is a chance for the economy to grow in a way that it is not now growing," Hill told said.

Holness, in outlining the role of the council during a press conference held at his office in St Andrew, said the party was in search of other ways, aside from the current extended fund facility under the International Monetary Fund, to eliminate poverty and drive growth, development and prosperity on the island.

He described the creation of the council as "a serious attempt at ensuring policy making is broad-based" and cautioned against attaching labels to its members.

"People want to contribute to the process and they should not be politically tainted. I think those days of trying to paint people into a political colour by virtue of who they decide to help, those days are gone," Holness said.

In addition to the four members named, the council will recruit technical experts and researchers to assist in the carrying out of data collection and analysis which will underpin policy positions put forward to Holness.

"When we win the next election, we have to start putting in place, within the first 100 days, the critical things to ensure that we are not only resuscitating the economy but we are also building the future economy," Holness said.

The next general election is due by December 2016.

Holness, parachuted into leadership of the JLP two months before the polls, led the party to a 21-42 defeat in 2011, making it Jamaica's first one-term government since the granting of universal adult suffrage in 1944.

The immediate task of the council is to find creative ways to stimulate the economy. After it has completed that task, the team will be required to present ideas on how to help stem the devaluation of the Jamaican dollar.

"We chose persons who are fairly independent-minded. We don't want people singing on the choir. We want to get the unvarnished truth as to what the economic situation really is and we want some out-of-the-box thinking, and I am certain with the team assembled, we will get that," Holness said.

Hill said yesterday that he was looking forward to "challenging and heated exchanges" in the shaping of economic options which Holness and members of the JLP hierarchy would adopt as policy prescriptions going forward.