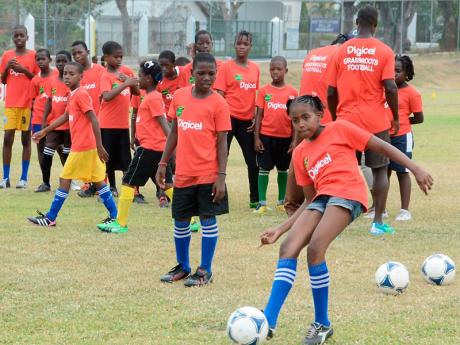 This youngster takes aim as she took part in the 'Hit the Target' competition at Saturday's Digicel/JFF Grassroots Clinic Festival of Champions held at the JFF Training Centre at the University of the West Indies. - Contributed

At a time when all eyes across the world are focused on the World Cup in Brazil, telecommunications company Digicel extended its investment in developing the sport locally at the youth level with a clinic, in partnership with the Jamaica Football Federation (JFF).

Launched in 2012, the 2013-14 leg of the Digicel/JFF Grassroots Clinic wrapped up at the JFF Training Centre at the University of the West Indies, Mona, on Saturday, with more than 140 of the top boys and girls who participated in a series of one-day clinics present at the 'Festival of Champions' awards ceremony, which also included football competitions.

Under the watchful eyes of several JFF coaches, including André Virtue, Vin Blaine and Jerome Waite, the young ballers showed off what they learnt in kicking, juggling, controlling, and handling the ball with finesse.

Waite, the national Under-23 assistant coach, was particularly impressed with the aim of the programme.

"Grassroots clinics are something we need to see more in Jamaica. We need to ensure that the development starts from early, so as long as you take the time out to teach these children what they need to know about football, then it will pay off in the long run. So I'm glad that Digicel is such a big part of this as it will help the development."

She said: "Digicel has been a consistent supporter of youth development in Jamaica, especially through sports. Our aim is to be involved in every stage of these youngsters' sporting lives. So we start them from early with the Grassroots Clinic, then they can move on to the next level, such as our Kickstart Clinics, when they are in high school. And should they make it to the national teams, we are there with our support of the Reggae Boyz and Reggae Girlz."

The short awards ceremony saw all those who participated in this season's clinic being recognised and rewarded, especially those who won the drills and small-sided games earlier.

Zahir Mohan from Manchester walked away with several of the top awards, including winner of the Crossbar Challenge, runner-up in the Dribbling Challenge, winner in the Overall Skills Challenge, and the Digicel Grassroots Ambassador for his parish, Manchester.

Also copping top awards were Trelawny's Lesroy Duncan, who won the Passing Challenge, and Warren Henlon, the Hit the Target Challenge. Trelawny was also given the Grassroots Community Award.

Former Reggae Boy Donald Stewart was the Top Trainer for this year.