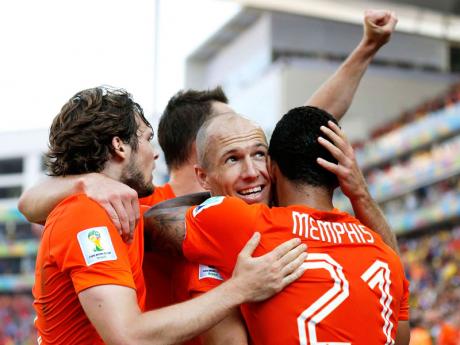 Netherlands' Memphis Depay (right) is congratulated by his teammate Arjen Robben as he celebrates scoring his side's second goal during the Group B World Cup football match against Chile at the Itaquerao Stadium in Sao Paulo, Brazil, yesterday. - AP

Brazil relied on their star, Neymar, for two early goals to beat Cameroon 4-1 yesterday and reach the World Cup's knockout stage for a South American showdown against Chile, a 2-0 loser to the Netherlands.

Winning Group B with their third straight victory made sure that the Dutch avoided the hosts so early in the tournament. Instead, the Netherlands will face Mexico, which beat Croatia 3-1 to advance alongside Brazil from Group A.

Spain beat Australia 3-0 in an inconsequential game between already eliminated teams, a victory providing a little balm on the disappointing defence of their title.

With free-flowing games and buckets full of goals the rule in this outstanding tournament, it took until the final minutes of the Group A games for Brazil to make sure they advanced as group leaders on goal difference over Mexico.

The Netherlands were the first perfect team to advance, finishing ahead of Chile in Group B. Spain had three points with yesterday's win and Australia had three losses.

Beyond the statistics, it again was Neymar who fully lived up to expectations of the 200 million football fans in Brazil with flair and lethal finishing, making the difference with first-half strikes against an African opponent that fought hard for one half before succumbing.

Neymar used an array of spin moves and delicate touches to get by players, delighting the crowd in Brasilia - including Britain's Prince Harry.

"I have the responsibility," said Neymar, and at 22, he is living up to it every single time he takes to the pitch. It seems half the Brazil jerseys from the beaches of Copacabana to gaucho towns in the interior carry his name, and with good reason.

Neymar has four goals from three games to lead the top scorer's standings, edging a group of five players, with three goals.

Much like the opener, Neymar carried the weight for his team, scoring the first with a subtle inside-foot flick, while adding a second with a darting run before wrong-footing the Cameroon goalie with a right-foot drive.

The oft-criticised Fred may have kept himself in the starting line-up with a header just after half-time. Substitute Fernandinho closed out the scoring for Brazil.

With everything to play for, Mexico came through with three goals in a 10-minute spurt of excitement late in the game against Croatia.

So often in this tournament, goals deep in the second half have made the difference, and yesterday was no exception.

The Dutch scored twice in the last 13 minutes against Chile to finish the group stage with three straight wins. Quite a turnaround for a team thought to be on the wane with aging stars like Arjen Robben.

Yet the Dutch have scored 10 goals in three victories. Now, only the foolhardy would relish the prospect of facing the orange-clad team.

"We wanted to be first in the group. Now we will see what is coming at us," said Robben, who added an assist against Chile to the three goals he scored in earlier games.

Leroy Fer scored a minute after going on as a substitute to get the Netherlands ahead in the 77th minute. Then, when some other players had already gone down with cramps, Robben launched into another of his trademark sprints across the pitch and passed perfectly to Memphis Depay for the tap-in that put the game away.

While Robben is going strong after hitting his 30s, age caught up with the Spanish stars this tournament, particularly in their 5-1 opening loss to the Netherlands.

They regained a little pride yesterday. In a game of goodbyes, David Villa marked his final appearance for Spain with a record 59th goal for the national team.

"It's sad because we would have liked to have spent more time here, but that's how it is," Villa said.

Fernando Torres, who set off Spain's rise by scoring the winner in the 2008 European championship final, also scored. Juan Mata added the third.

Spain also won the 2010 World Cup and repeated as European champs in 2012.

At least Spain avoided finishing last in their group.

Uruguay, the semi-finalist of 2010, could be facing elimination today, but after Luis Suarez returned from injury and scored both goals against England, there is no counting out the former champions.

Suarez shrugged off any lingering concerns about his surgically repaired left knee and said he was in "perfect shape" to face Italy.