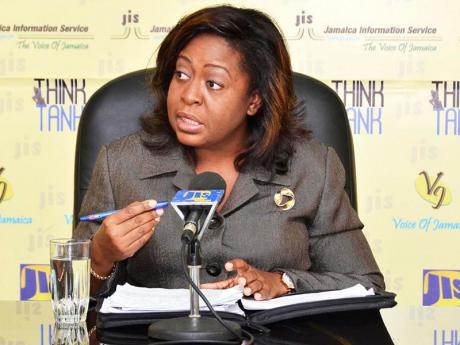 Lisa-Ann Grant, director of the Work Permit Unit in the Ministry of Labour and Social Security addressing a think tank meeting at the Jamaica Information Service recently.

The Ministry of Labour and Social Security said foreigners' demand for Jamaican work permits went up by 23.1 per cent in fiscal year 2013-14.

In its annual report tabled in Parliament recently, the ministry said the largest number of work permits, 69.8 per cent, were granted to persons in the "professional, senior officials and technicians" occupational category.

In relation to countries of origin, the largest number of recipients, the Ministry said, were from Asia with 2,875 or 69.5 per cent of the total.

Europe was next with 453 or 10.9 per cent, while the lowest number of applications were from Oceania.

Following the professionals, senior officials and technicians category, the second highest category of applications were for permits to work as "plant and machine operators, and assemblers" with 466 or 11.3 per cent, while "crafts and trade-related" workers was next with 314 or 7.6 per cent.

The ministry said that examination of the data by industry shows that a total of 1,487 or 35.9 per cent of work permits was approved for the "wholesale and retail trade, repair of motor vehicles, motorcycles and personal and household goods" industry, while "construction" was next with 1,228 or 27.7 per cent.

The ministry also granted 1,601 work permit exemptions during fiscal year 2013-2014, a 5.7 per cent increase over the previous year.

Exempted individuals include persons married to Jamaicans for more than a month and other categories identified under the Foreign Nationals and Commonwealth Citizens (Employment) Exemptions Regulations 1964.