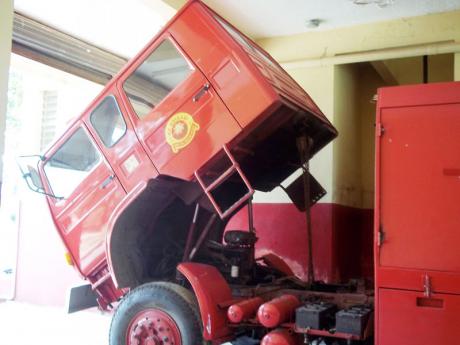 This fire truck at the Junction Fire Station in St Elizabeth was badly in need of replacement, when The Gleaner visited last year. - FILE

A performance audit by the Auditor General's Department (AGD) has found major deficiencies in the operation of the Jamaica Fire Brigade (JFB) and how it manages its fire-prevention activities in order to minimise injuries, loss of lives, and damage to properties.

The Pamela Monroe Ellis-led AGD audit, which was tabled in the House of Representatives yesterday, showed that the firefighting agency's ability to carry out emergency medical care and rescue services has been severely affected by out-of-service emergency vehicles.

Monroe Ellis outlined in her audit that 36 per cent of the JFB's fleet of emergency vehicles were out of service. At May 2014, the JFB's fleet of emergency vehicles, including pumpers, water tankers, and fire boats, stood at 75, of which 31 (41 per cent) were out of service, some for periods of up to six years. As a result, the auditor general said the JFB was unable to deploy a pumper to four fire stations.

The audit also found that while there were other emergency vehicles at the Portmore and Montego Bay fire stations, no vehicles were assigned to the Annotto Bay and Old Harbour fire stations.

At the same time, it was revealed that only one of six ambulances assigned to the fire services was operational to support emergency activities. The other five ambulances have been out of service for periods of up to 20 months.

"These out-of-service vehicles, coupled with the fact that 37 per cent of the 13,207 fire hydrants were defective or without water, has impaired JFB's ability to effectively attend to emergency activities," Monroe Ellis said.

The auditor general also found that the JFB is now without a working fire boat as the one assigned to the tourist resort, Ocho Rios pier, has been out of service since August 19, 2013, due to engine failure. It has been discovered that the other fire boat, which was at dry dock since June 2007, was written off by the Ministry of Finance and Planning in April 2014.

In its response to the auditor general, the JFB indicated that it would require a fire boat at each of the main ports - Kingston, Ocho Rios, Falmouth, and Montego Bay - to adequately provide support to firefighting and rescue emergencies.

Noting that the JFB was not assessing its timeliness in responding to fires, the AGD said it reviewed logs at three fire stations that showed the time emergency calls are received, vehicles are dispatched, and arrival at emergency scenes; however, the AGD said there was no evidence that the JFB used this information to analyse its response time.

"Without this evaluation, JFB would not be able to determine whether it is reaching fire and other emergency scenes within a reasonable time. The evaluation would also assist the JFB to monitor its response time and to institute appropriate measures to improve performance," Monroe Ellis pointed out.

The JFB indicated that "to optimise response time, the brigade has in place a reverse response method, where traffic flow and the conditions of access routes are used to an accident once practicable".