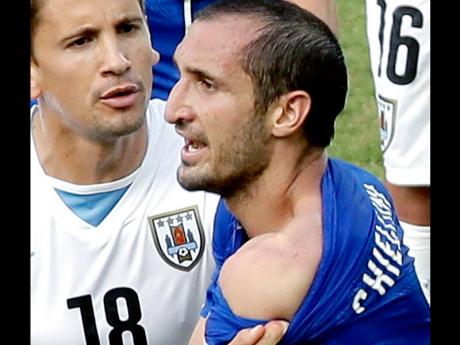 Luis Suarez could be banned by FIFA for up to 24 matches or two years for apparently biting Italy defender Giorgio Chiellini, according to the governing body's disciplinary rules.

Still, any action could depend on FIFA judging the case using video evidence, which FIFA President Sepp Blatter is on record this year as supporting.

"Video evidence can contribute greatly to fair play, provided the sport's disciplinary bodies are prepared to use it - and they should," Blatter wrote in his column in FIFA's weekly magazine in February.

Now, the future of Luis Suarez at the World Cup depends in the first instance on the report of Mexican referee Marco Rodriguez.

Yesterday, FIFA said only that it was waiting for Rodriguez's report before evaluating it. That is a standard procedure following every match at a FIFA competition.

There is a World Cup precedent for video review.

Rodriguez and his two assistants appear not to have seen - or realised the severity - of Suarez apparently biting Chiellini late in yesterday's match.

Had they done so, or thought so, Suarez would surely have been shown a red card for 'serious foul play'.

The code allows for suspensions to be applied by time or number of international matches.

"Unless otherwise specified, it may not exceed 24 matches or 24 months," Article 19 of the FIFA code states.

The use of video evidence is an intriguing aspect of this case.

Television and still images have clearly shown Chiellini pulling aside his blue shirt to reveal marks on his left shoulder.

Proof which can be presented to a FIFA disciplinary hearing includes "audio or video recordings".

If the referee's report to FIFA does not fully deal with an incident, the code appears to allow challenges.

FIFA would find it hard to resist overwhelming evidence provided by the 34 cameras trained on each World Cup match as part of its high-tech broadcasting operation.