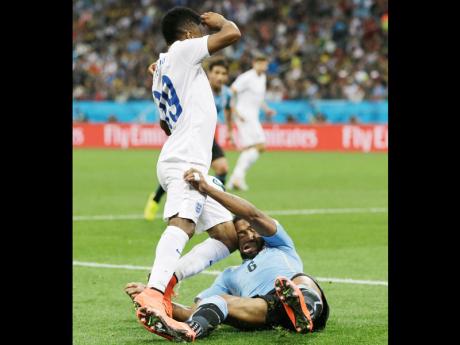 England's Raheem Sterling runs into Uruguay's Alvaro Pereira with his knee during the Group D World Cup football match at the Itaquerao Stadium in São Paulo, Brazil, last week Thursday. Pereira was knocked out by the blow. - AP

Jamaica-born Raheem Sterling failed to rescue England from early World Cup disaster, but his involvement in an on-field incident has sparked debate that could help save lives.

The team's doctor tried to get Pereira substituted, but the revived full-back protested, re-entering the game.

That set off a firestorm at the World Cup and beyond Brazil. Critics argued the doctor shouldn't have been overruled.

"That Pereira was allowed to play on without a thorough sideline concussion assessment is just appalling. Lives are at stake, FIFA. Wake up," tweeted Andrew Orsatti, director of communications for FIFPro.

The world players' association was joined by former internationals in lashing football's governing body for not adequately protecting players.

Dr Derrick McDowell, a physician with Jamaica's national football programme, said protocol is clear on the issue of head injuries, especially when a player loses consciousness or suffers a concussion.

"Once a player has been deemed to have suffered a concussion he should be removed from the field," he explained while attending the June 22 Belgium vs Russia World Cup game at the Maracanã Stadium here.

Without direct knowledge of Pereira's injury, McDowell declined to speculate on his condition after the collision with Sterling.

However, he said the physician's decision, using the internationally known hand signs to indicate the player should be substituted, was clear.

"I wouldn't say the player had a concussion," McDowell said. "... But the Uruguayan doctor's signal is proven that the player should come out."

With Jamaica, McDowell said the decision to replace a player who suffers a head injury during a game is the coach's, in consultation with the doctor.

"It has to be group decision," he said.

However, McDowell insisted a concussion usually dictates the player must leave the field pending further evaluation.

"Certainly, you want to have respect for the management of the fellow," said McDowell. "You have a concussion, you step out."

He said FIFA's guidelines, coupled with Jamaican coaches' education and willingness to respect national team doctors, usually result in the correct decision being made on whether the player returns. Danger signs aren't hard to recognise, especially if the player is knocked out.

"It's straightforward," said McDowell. " ... Once (they're) unconscious for a second, two seconds, three seconds, you know."

In 2010 in the United States, Luton Shelton suffered a head injury in training. McDowell had him taken to the hospital for tests. Shelton was ruled out of Jamaica's international against Costa Rica, although he hadn't suffered a concussion, according to the doctor.

McDowell recalled another incident where a player suffered concussion and was removed from an international, but showed signs of "post-concussion syndrome weeks after". Head injuries can be serious.

"Yes, it can be life and death," said McDowell.

However, the decision to sideline a player can get complicated, for example in a high-stakes tournament like the World Cup, as in Uruguay's case.

"The recommendation by FIFA is that they (players) can be removed," said McDowell, who explained that the degree of a concussion, ranging from mild to serious, determines if the player continues in the doctor's assessment.

"So it's a very sticky situation. You're asking some serious questions here."

Courses for football coaches in Jamaica, he added, include information on head injuries.

"The coaches know about it," McDowell said. " ... So it's something that's taken seriously."

Pereira's actions could have caused further damage to him and others, experts claimed. After returning to the field, he rashly lunged into England's Glen Johnson.

"No one in (their) right mind makes that challenge on (a) ball rolling out of bounds," Aaron Gray, a sports physician at the University of Missouri in United States, wrote on Twitter. "Irritability, anger, confusion (are) all concussion symptoms."

England are eliminated, but the Sterling incident left a mark on Pereira and football. It's "certain" to spark FIFA action, according to McDowell.

"I'm sure there's going to be some kind of discussion going on behind closed doors about it," he said.