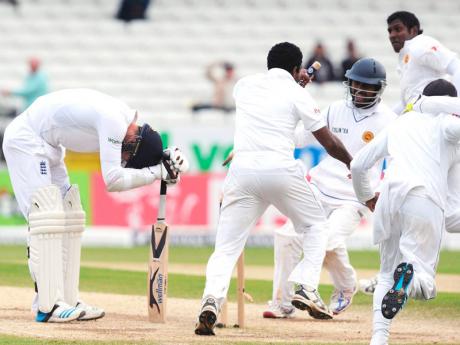 Anderson faced 55 balls without scoring in a desperate last-wicket stand with Moeen Ali (108 not out), before he fended an Eranga bouncer to Rangana Herath at leg gully, giving Sri Lanka 1-0 series victory with one delivery to spare.

The Sri Lanka players piled on each other in celebration, while Anderson slumped over his bat. He was in tears as he accepted England's Player of the Series award.

England captain Alastair Cook, who posted scores of only 17 and 16 in the Test, accepted that scrutiny over his captaincy would intensify while his own form and his team's performances continue to drop.

"You're there at the top of the order to score runs, and when you haven't done it for 12 Test matches, it becomes harder and harder," Cook said. "No one has got a divine right to captain the side or play in the side if you're not performing. If you do it for much longer, you won't be asked to captain England. I never quit on anything. I am a determined bloke and I am determined to turn this around."

England resumed the fifth and last day at 57-5 and needed to bat through the day to avoid defeat.

The equation was helped by a rain-shortened morning session when Sri Lanka didn't take a wicket. But the momentum changed after lunch when Nuwan Pradeep removed Joe Root (31), when he edged to Lahiru Thirimanne at gully.

"I'm obviously very gutted - 100 to save the game would have been fantastic," Ali said. "It doesn't mean as much with the guys being so disappointed."

Sri Lanka captain Angelo Mathews, who scored a career-best 160 in his team's second innings, was ecstatic to lead his line-up to their first series victory in England.