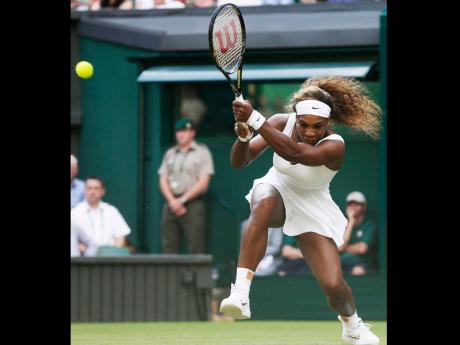 Serena Williams of the United States returns a shot to fellow American Anna Tatishvili during their first-round match at the All England Lawn Tennis Championships in Wimbledon, London, yesterday. - AP

Chasing a shot to his right, Rafael Nadal slipped and tumbled to the Centre Court turf. He popped up, raced across the baseline to get back into the point and later capped the 14-stroke exchange with a backhand passing winner.

The reason for the two-time Wimbledon champion's recent inability to play well on grass remains something of a mystery. As far as Nadal was concerned yesterday, all that mattered was that he dusted himself off and eventually ended a three-match - and seven-set - losing streak on the slick surface.

Overcoming a deficit against a flat-hitting opponent who kept finding lines early, Nadal beat 51st-ranked Martin Klizan of Slovakia 4-6, 6-3, 6-3, 6-3 to reach the second round. Nadal's reaction afterward - pumping fists, raising arms aloft, tossing souvenirs to the crowd - was rather over-the-top for a guy who owns 14 Grand Slam titles.

"So happy for the victory. In the end, the match was difficult. After the first set, (it) was even more difficult," said the Spaniard, who is ranked No. 1 and seeded No. 2, but approached this opening-round encounter with some trepidation.

"When you go on court and you lost last year in the first round, the year before in the second round ... (I'm not) going to lie ... it stays in your mind."

Next for Nadal is a match against the man who beat him in 2012's second round, Lukas Rosol of the Czech Republic.

"He is a very dangerous player; very strong, very powerful at the baseline," Nadal said.

Other past champions in action on Day Two advanced, too, including Roger Federer, Serena Williams and Maria Sharapova, all in straight sets.

Last year, when everything around these parts was turned upside down by surprise after surprise, that trio joined Nadal with early exits.

Williams was the last of the group standing and she departed in the fourth round.

Williams needed to cast aside four break points during a 10-minute first game yesterday, but after getting that out of the way, breezed to a 6-1, 6-2 win against Anna Tatishvili. Sharapova lost all of one game against British wild-card entry Samantha Murray.

"This is what I still play for," said the 33-year-old Hewitt, a former No. 1 now ranked 48th after a series of injury issues. "You do all the hard work to come back and play in places like this. You don't get sick of coming out here and playing at Wimbledon."