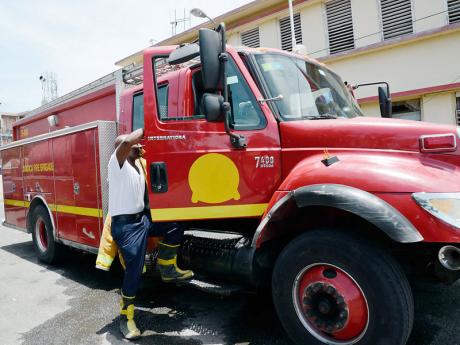 A firefighter climbs aboard a fire truck after the Spanish Town Fire Station was notified of a fire during a visit by The Gleaner yesterday. - Rudolph Brown/Photographer

An alarm sounds at the Spanish Town Fire Station and a team of firefighters jolt into action, hurriedly putting on their fire-proof gear and running towards the station's only pumping vehicle.

But this frenzy of movement soon comes to a halt. A mechanical problem with the fire truck means that pressure needs to build before the vehicle can be driven, wasting critical time in an emergency scenario.

Two minutes pass and the truck moves off, sirens blaring.

This is just one of a catalogue of serious problems blighting the proper functioning of the Spanish Town division of the Jamaica Fire Brigade (JFB) that were outlined to The Gleaner on a visit yesterday.

A damning report from the auditor general on the state of the island's fire brigade, tabled in Parliament on Tuesday, remarkably appears to have understated the severity of the problem. The Gleaner spoke with senior fire officials in the former Jamaican capital.

"Nineteen ninety-five, was the year the fire brigade had enough resources," said one senior official who has been working at the station for 35 years.

The Gleaner was told 1995 corresponded with the appointment of Major George Benson as commissioner of the JFB.

"If we had more equipment and more resources, we'd manage much, much better, at least 60 per cent better," explained the fire official who spoke alongside three colleagues while seated in a dated office in visible need of repair.

The firemen explained that they had nowhere to house their two fire units and this had led to a spate of break-ins and thefts.

Most worryingly, the men spoke of inadequate equipment and leaking fire hoses that were often cut instead of being replaced when they were damaged, adding that the department had only 400 feet of hose when 2,000 feet was needed.

The Gleaner was taken, to a locker room that houses equipment showing visible signs of deterioration, with gaping holes in firefighting boots and tears that exposed undergarments to the elements.

"We are not safe going into fires," one firefighter said.

"All dem hydrants - a years dem ting deh bout and all dem ting deh nuh fix all now ... . All right now if fire bruk out inna town, a problem, cah none of dem nah work."

Over in Portmore it was a similar story.

"As a resident, I feel uncomfortable, because that's a fire that can happen to any and anybody," said 35-year-old business operator Omar Bolt.

Sixty-two-year-old Portmore resident Kenneth Bryan told The Gleaner there simply were not enough resources to prioritise the JFB.

"Talk bout weh we ago do to make the yutes progressive when dem reach my age that is what is important to mi. Nuh tell me about no likkle one house weh bun down."