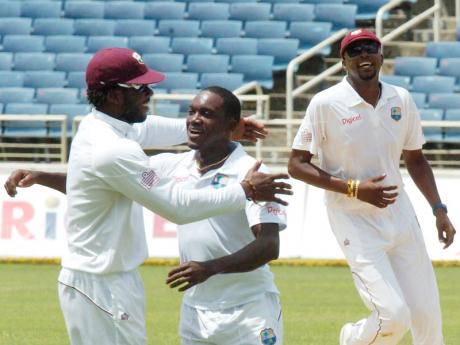 Jerome Taylor (centre) is congratulated by Chris Gayle for taking a wicket, while Sulieman Benn moves in to join the celebration during the second Test cricket match against New Zealand at Queen's Park Oval, Trinidad. - Dellmar

The West Indies, heartened by a series levelling victory, will take on New Zealand in the third and deciding Test match starting today.

Denesh Ramdin's men will attempt to continue from where they left off when they defeated Brendan McCullum's side by 10 wickets to level the three-match series one-all.

West Indies are unlikely to make any changes to the 11 that squared the series, despite the availability of off-spinner Shane Shillingford, who missed the last Test due to a niggle.

New Zealand have brought in left-armer Neil Wagner as the third seamer in place of the leg-spinner Ish Sodhi, whose four wickets were expensive in Trinidad.

The Black Caps, who have won only one series in the Caribbean, in 2002, and who pounded the West Indies in the opening Test at Sabina Park, will be hoping to maintain a reputation that has been growing over the last two seasons.

However, Chris Gayle, who blasted a match-winning unbeaten 80 off just 46 balls on the last day of the second Test at Queen's Park Oval in Trinidad, says he is looking forward to batting at Kensington Oval.

"We've got to be positive. The start is going to be important for us as opening batsmen. Once we get the start and use home advantage to the best, we will see what happens," said Gayle.

"Kensington is beautiful ... good wicket to bat on. It's a fantastic ground. I love playing here. And you get quality for your shots, as well, so it's something I am looking forward to."

With Kemar Roach and Jerome Taylor, leading the West Indies firepower, the bowling looks threatening on a Bridgetown pitch that promises to be seamer-friendly.

"Kensington always has a little bit in it for the bowlers, as well," the West Indies coach noted."

The final Test match could result in a milestone for comeback kid Taylor, the leading wicket-taker in the series with 10. Taylor, who has kept batsmen under pressure with accurate bowling, is eight short of 100 Test wickets.

"Jerome Taylor has been a very good leader of our attack and everyone has confidence from the win in Trinidad and the ultimate goal is to win the series" said Gibson.

West Indies were motivated by the performances of two in-form players for the Trinidad Test - Kraigg Brathwaite and the previously uncapped Jermaine Blackwood.

Brathwaite scored his maiden Test hundred, while Blackwood impressed with 63.

"Very impressive. Being on the bench and for a young player to actually come in playing his first game for the series to be able to get a hundred that's fantastic," Gayle said of Brathwaite, the Barbadian batsman.

"That's a bright future for West Indies cricket. So hopefully he can actually carry on here on his home turf and get another century in front of his home town."

The deciding Test between West Indies and New Zealand will be the 50th to be played at the historic Kensington Oval.