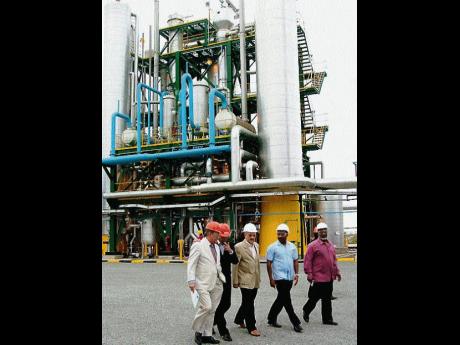 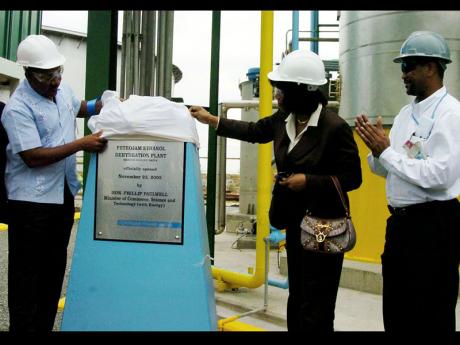 Discussions are under way between energy and sugar interests for local sugar estates to set aside about one million tonnes of cane annually for the production of wet ethanol.

But at least one company in the agro-processing business has poured cold water on the plan, saying it will likely create supply rivalry in the spirits production sector as both ethanol and rum are made from molasses.

Ricardo Neins, general manager of state-owned Petroleum Ethanol Limited (PEL), said this week that while the company sees little prospect of re-entering US markets at full blast, other opportunities for export lie in Canada and Europe.

PEL was in the business of producing anhydrous fuel-grade ethanol that was mainly traded duty-free with the United States. Neins said opportunities for US export "died in reality when higher tariff charges for Brazil expired in 2010".

Since the mothballing of PEL's dehydrators, Jamaica has become the third-largest importer of ethanol from the US, behind Canada and Brazil. The local market for ethanol for blending is estimated at 17 million gallons.

However, plans to ramp up sugar cane production in Jamaica has renewed hope of developing a domestic supply market for the raw material, and has led to talks with local factories and state-run sugar agencies.

PEL is not configured to produce wet ethanol and does not intend to invest in that side of the business, said Neins.

Instead, the proposal is for the sugar factories to produce molasses from a targeted one million tonnes of cane, and manufacture the wet ethanol for sale to PEL.

Neins says discussions are ongoing between the Sugar Transformation Unit and local producers. The one million tonnes of cane, he said, would produce sufficient wet ethanol for PEL to manufacture enough fuel-grade ethanol for the Jamaican market.

One million tonnes of cane can produce up to 70 million litres of ethanol, according to Neins. That converts to about 18.5 million gallons of ethanol, or just under half of PEL's 40-million-gallon capacity.

Confirming the possibility of supply, general manager of Jamaica Cane Product Sales Limited, Karl James, said on Wednesday that the sugar industry is working on a target of 3.5 million tonnes of cane by 2018, but if financing for additional planting were made available immediately, the energy company could start receiving supplies of wet ethanol from as early as next year.

If PEL "were to provide funding to plant an extra one million tonnes of cane now, then we could guarantee that entity 40,000 tonnes of molasses within the next year to give 12 million litres of ethanol," said James, who himself is a former chairman of Petrojam Ethanol.

His 12-million estimate appeared to be at wide variance with Neins' figure, but he later clarified that his figure was not meant to be an assessment of possible output, but was JCPS' proposal on how much ethanol the factories should supply to PEL.

In the meantime, said James, whose company JCPS is one of two marketing agents for Jamaica's sugar, once the target of 3.5 million tonnes of cane is reached "we will be able to supply the local rum industry with its total requirement of molasses and with excess molasses to produce six million litres of ethanol. Until that time, we are looking at how we can provide more cane to provide some more ethanol."

JCPS "would seek to collaborate with entities with the capacity to make wet ethanol and then provide such wet ethanol to Petrojam Ethanol to be dehydrated and included in the local gasolene offered," James told the Financial Gleaner.

Neins said PEL is working with a medium-term schedule for potential domestic supply of wet ethanol.

Once the sugar industry hits its 3.5m target for cane production, which would double its current output, he said, there might be room to accommodate the needs of the ethanol sector.

However, Ian Parsard, the senior vice-president of finance and operations at Jamaica Broilers Group, which operates in the ethanol market through subsidiary JB Ethanol, is painting the plan as overly optimistic.

"As far as sugar cane is concerned, there is tremendous more value in rum. Production for ethanol feedstock is practically remote because of the value of Jamaican rum," Parsard said.

JB Ethanol has switched to a Central American source for feedstock, but is keeping details of that arrangement close to the vest. Parsard said JB Ethanol is awaiting delivery of wet ethanol to supply a contract it has in hand.

"We will process (feedstock) from anywhere" it can be sourced, he said.

"The market is very volatile", which means that JB Ethanol is constantly checking input and product prices to snap up business opportunities at the right time, according to the Broilers executive.

Attempts to reach George Callaghan, the head of the Sugar Transformation Unit, were not successful.

However, an online report titled Government of Jamaica Sugar Adaptation Strategy, written by Callaghan himself on the development of the industry, projects that by the year 2015, the industry should be producing 3.5 million tonnes of cane for sugar; 200,000 tonnes of raw sugar for export; 134,000 tonnes for rum; and 70 million litres of ethanol for gasolene blending; while the bagasse would be used for cogeneration of electricity.

Neins is not discounting a change in the Brazilian situation and says discussions are under way with potential supply partners.

"We are anxious to work a deal with Brazil while the prices make sense," said the PEL manager.

"Right now, I could get all the feedstock I need but the landed product costs more than what it would cost to import ethanol directly. Brazil is always a favourable potential supplier, but at current off-take rates by the US, it is not economically feasible for them," he said.