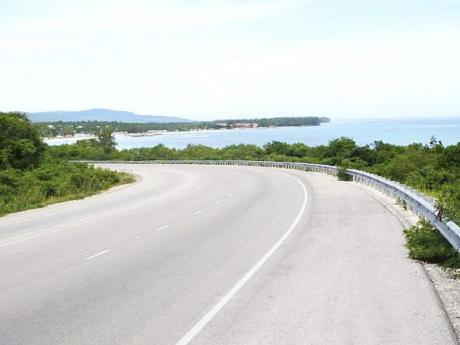 A section of the Falmouth highway which Virgo International is counting on to bring business to its new commercial complex. - File

Trelawny-based Virgo International Limited says it has invested $100 million in new commercial space at Florence Hall to tap into what it describes as a growing business district along that side of the north coast.

The company, which operates a Petcom service station in Albert Town, has developed another gas station at the new complex, which will operate under the Johnson's Petroleum marquee.

"We did our first project in Albert Town, a gas station, convenience store and a restaurant. So last year, we ventured unto the coast to develop a project which is more or less like a rest stop," said Virgo.

The Florence Hall Business Centre lies across from the Trelawny Multipurpose Stadium and is one-third mile in from the main highway.

The 12,000-square-foot complex will have six units available for lease, which the company hopes to house a restaurant, pharmacy, legal offices, among other services.

"We have stores we are targeting mainly for medical use, because to get specialist care you have to go all the way to Montego Bay or Kingston and, seeing that the whole area is developing, we want to get it here," Virgo said.

The complex offers more than 50 parking spaces in addition to 6,600 square feet of retail space, Virgo International said in a press advertisement.

"Our main thrust is dealing with petroleum and petroleum products so we build gas stations that we operate, but with this project we tried to incorporate more things in the one development," director Virgo told the Financial Gleaner.

The complex is funded partially through loans, he said. The land on which it sits was previously acquired by the company.

Virgo International's core business is the distribution of petrol and liquid propane gas. The family-run company has operated a Petcom service station in Albert Town, Trelawny, since 2004.

The directors of the company are Dowen Virgo and daughter Nicole Virgo, with the older Virgo listed as the only shareholder.

Virgo International will maintain an office on the lower level of the two-storey complex.

"Falmouth is one of the fastest growing towns right now on the north coast, especially with the introduction of the cruise ship pier, the multipurpose stadium and more than 2,000 homes directly across from the development, plus commuters," the businessman said.