El Nino may return by end of year 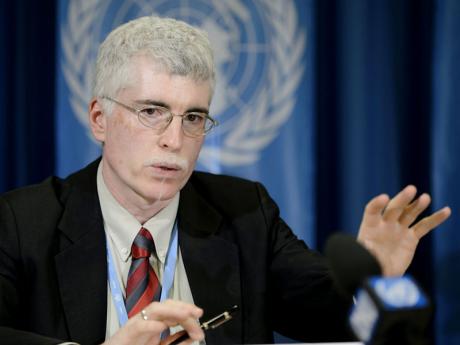 Maxx Dilley, director, climate prediction, WMO, speaks during a press conference about the El Nino Update, at the European headquarters of the United Nations, in Geneva, Switzerland, yesterday.

There's a strong chance an El Nino weather event will reappear before the end of the year, and shake up climate patterns worldwide, the United Nations weather agency said yesterday.

The El Nino, a flow of unusually warm surface waters from the Pacific Ocean, toward and along the western coast of South America, changes rain and temperature patterns around the world and usually raises global temperatures.

An update yesterday from the Geneva-based World Meteorological Organisation (WMO) puts the odds of El Nino at 60 per cent between June and August, rising to 75-80 per cent between October and December. It said the expected warming would come on top of the effects of man-made global warming.

"El Nino leads to extreme events and has a pronounced warming effect," said WMO Secretary-General Michel Jarraud. "It is too early to assess the precise impact on global temperatures in 2014, but we expect the long-term warming trend to continue as a result of rising greenhouse gas concentrations."

The outlook is for El Nino to reach peak strength during the last quarter of the year and into the first few months of 2015 before dissipating.