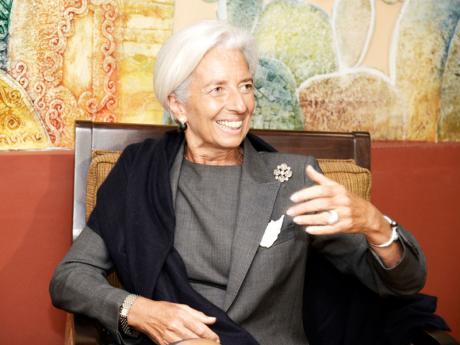 Christine Lagarde, managing director of the International Monetary Fund (IMF), is expected to face tough questions on the sliding local currency, even while bringing good tidings when she comes face to face with Jamaicans during her two-day visit here.

With concerns growing among the country's business interests as they monitor the plummeting value of the Jamaican dollar, local players are hopeful that Lagarde's interventions over the next 48 hours will save the day.

Members of the business community have expressed hope that the visit will generate positive news that the stringent conditions of the four-year extended fund facility imposed on Jamaica will be considerably eased.

Dr Winston Dawes, the new president of the Clarendon Chamber of Commerce, is harbouring a desire to hear Lagarde pay more than lip service in commendation of Jamaica's continued success in fulfilling the IMF conditions, a sentiment echoed repeatedly by various other business leaders across the island.

"I would think that, given the good job that we are doing in meeting its conditions, Madame Lagarde, we can expect some extra cash and the easing of requirements," said Dawes.

Lagarde flew into the island last night to commence her two-day working visit in Jamaica today.

Her arrival coincides with the local currency dipping to J$112.03 to US$1 with no end in sight to the depreciation, which the opposition Jamaica Labour Party has described as "aggressive".

Multilaterals, headed by the IMF, have been heaping praise on Jamaica's determined effort to meet requirements under the leadership of Finance Minister Dr Peter Phillips.

Jamaica has met all major conditions and has passed four successive IMF tests - an achievement that is being touted as a record in government circles.

However, Dawes, a medical doctor with years of service in the public sector, complained that the IMF's stricture of a 7.5 per cent fiscal surplus was affecting Jamaica's ability to function, evident in the Government slashing overtime arrangements for doctors and nurses in the public-health sector.

Political commentator Richard 'Dickie' Crawford said his organisation - Jamaica United for Sustainable Development - supported the call for an assessment, from Lagarde, of the present agreement with Jamaica and its reported success.

He said this must be done within the context of the special concerns of so many in the country regarding the systematic devaluation of the Jamaican dollar and the increasing debt levels in the country.

"The country should hear if there are any special arrangements to alleviate this debt and a further report on the current attempts of the IMF to restructure its operations and the current private bank-led world economic policies, which are creating greater disparities and inequalities … ," said Crawford, who has previously written to Lagarde on the issue.