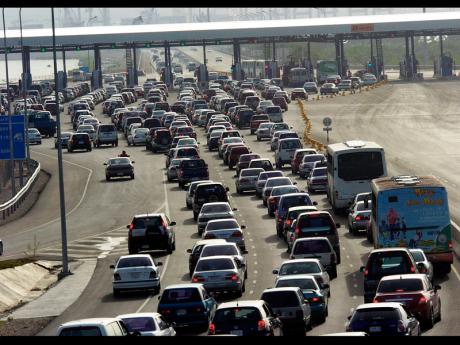 Motorists make their way to the toll plaza at the Portmore leg of Highway 2000. - FILE

HOWARD HAMILTON, chairman of the Greater Portmore Joint Council, has said the increase in toll rates will worsen Jamaica's economic climate. As of July 5, there will be an increase in the toll rates at several locations. Class one vehicles rates for the Portmore leg of Highway 2000 will move from $150 to $170; class two vehicles rates have been increased by $30, forcing motorists to pay $260, and motorists with class three vehicles, who currently pay $450, will have to fork out $520.

"It was already unaffordable. Now, it is going to make travelling to and from home harder as it is going to be much more expensive than before. Everybody will be affected in Portmore now that the increase has come through," Hamilton told The Gleaner.

He added: "I think it is time for the political representative of Portmore to consider the new financial hardships that the residents will now be exposed to, and ... sit down with the operators of the toll and make representation on behalf of the Portmore people, as they have been silent. I have not heard a word from anyone of them."

Hamilton also said there should be a public consultation before any further increase is granted.

Meanwhile, in a press release on Wednesday, Opposition Spokesman on Transport Dr Horace Chang labelled the impending increase of toll rates as anti-people and anti-business.

Chang called on the Government to immediately review the cost structure with the owners of the road. He said the cost is prohibiting many persons from using the road and is a heavy burden on those who do.

"What is clear is that, almost every week, consumers are faced with new increases at the wholesale stores, in the supermarkets, at the gas pumps and in everyday living. The manufacturing sector is also facing increases because of the devaluation of the Jamaican dollar and its impact on electricity rates," he said.

"This increase in toll rates will continue the trend of increases, so that, in addition to everything else, consumers and business people alike will have to deal with higher transportation costs," Chang continued.