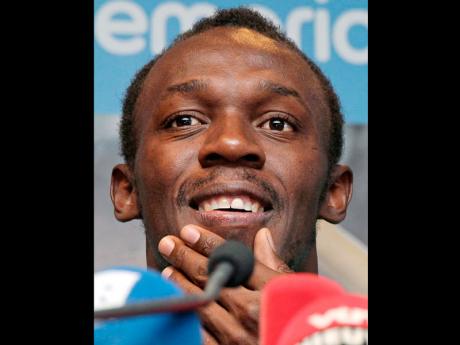 Track and field fans at next month's Common-wealth Games in Glasgow, Scotland will be delighted with news that Jamaican sprinting star Usain Bolt has made himself available to compete at the July 23-August 3 event.

Bolt, who has enjoyed a stranglehold on international sprinting since taking three gold medals in world-record times at the 2008 Beijing Olympic Games, advised, through his website, that he has informed the Jamaica Athletics Administrative Association (JAAA) of his availability.

If selected, however, the 27-year-old will only compete in the 4x100m relay.

Bolt has been working to regain fitness and form after his build-up was disturbed by injury earlier this year, forcing the double Olympic champion to withdraw from races in Ostrava and Paris as well as the ongoing JAAA/Supreme Ventures National Senior Championships, which this year is being used to help select Jamaica's athletics team to the Commonwealth Games.

There were doubts that the sprinter would feature at the Games after it was confirmed that he would miss this week's Nationals.

"I am not ready to compete at the Jamaican Championships this weekend, but I have informed the JAAA's that I am available for selection for the Commonwealth Games in Glasgow and have submitted the relevant documentation," Bolt said.

The National Senior Championships is considered mandatory for athletes hoping to represent Jamaica at senior international competition, but under the JAAA selection criteria, injured athletes are allowed to skip the championships and maintain consideration once a medical exemption is granted.

Bolt, however, underlined that he does not want to take the place of someone who earned it at this weekend's trials, but that he hopes to at least feature in a relay.

"I do not wish to take the place of anyone who qualifies this weekend in an individual event, but I am available for relay duty if the selectors feel I can be an asset to the Jamaican team in Glasgow," Bolt said. "I have received lots of requests, invitations and messages of support from my fans in Scotland who are looking forward to a great event," he added.

One of Bolt's major sponsors, Virgin Media, last year signed on as the presenting partner of track and field at the Commonwealth Games. The Jamaican has already featured in several high-profile advertisements for the New York-based company founded by Richard Branson.

JAAA officials could not be reached for comment up to press time, but Bolt's inclusion in the expected 70-member squad to Glasgow would certainly raise the profile of the championships, which due to the usual absence of top stars, has not always been shown the respect many feel it deserves.