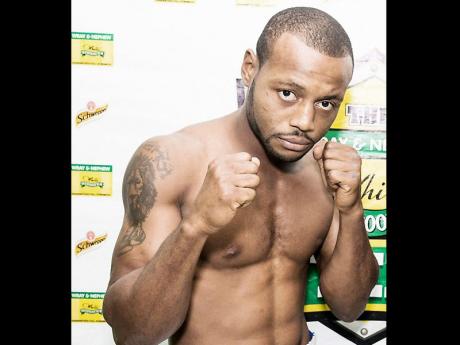 Sakima Mullings, 31, the boxer who is seeded No. 1 in the Wray and Nephew Welterweight Contender 2014 series, punched his ticket to the finals on Wednesday night with a dramatic technical knockout victory over Donovan 'Police' Campbell.

The end came at one minute and 56 seconds of round four.

Mullings will now meet Tsetsi Davis, the No. 3 seed, and the winner of the first semi-final, on July 9, at the National Indoor Sports Centre. Davis scored a unanimous points decision over Howard Eastman from Guyana on June 18, and sent warning signals to Mullings immediately after the fight last Wednesday, with a challenge inside the ring that left Mullings smiling, and promising to answer him with his fists in two weeks' time.

It was apparent from the first round that Mullings had no intention of fighting for eight rounds. After a brief feeling-out process when both boxers looked tentative, Mullings suddenly opened up an started throwing hard punches to the body and head of his opponent. There was a furious exchange between the two boxers in the last 10 seconds of the round, and the standing-room-only crowd loved what it was seeing, and cheered wildly.

There were great expectations as the second round started, and there was a buzz in the newly branded Wray and Nephew Colosseum, downtown Kingston, the venue for the semi-finals, as Mullings came out on the attack once more. He was on to Campbell in a flash, and a mixture of short jabs and hooks to the head, and vicious body shots, had Campbell in trouble.

Near the end of the round, Mullings dumped Campbell on the canvas for the first time with a right hook to the head. Campbell was not badly hurt, however, and managed to survive to the bell.

Campbell, who is 45 years old and is one of the fittest boxers in Jamaica today, bounced out for round three and showing no ill effects from the knockdown. The early stages of this round saw both men exchanging jabs, but almost as if it was scripted, Mullings stepped up the pace as the end of the round came. The exchanges were furious once more, and Campbell flinched after being hit by a left hook to the head.

The fourth round was dramatic. Campbell tried to "fight fire with fire" and for a brief moment took the action to Mullings with jabs and hooks. Mullings launched a quick counter-attack, with left hooks followed by hard body shots as his main weapons of destruction, and Campbell went down for the second time. He was up quickly and did enough to convince referee Eion Jardine not to stop it. Shown four fingers by the referee, he counted correctly, and the referee allowed the fight to continue.

It was not for long, however. Mullings attacked Campbell and a flurry of punches in the red corner had him out on his feet. The referee rushed in and stopped it, after which Campbell fell to the canvas.