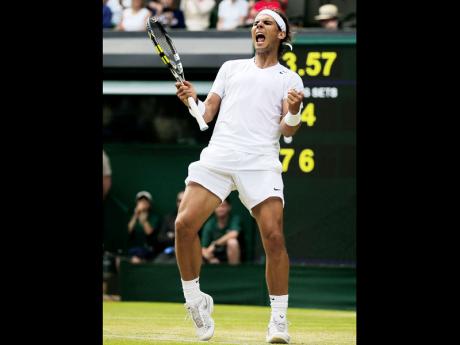 Spain's Rafael Nadal celebrates after he defeated Lukas Rosol of the Czech Republic in their Men's Singles match on Centre Court at Wimbledon yesterday. - AP

Two years after being knocked out in the second round of Wimbledon by Lukas Rosol, Rafael Nadal found himself one point away from falling behind two sets to love to the same player on the same Centre Court in the same round yesterday.

It looked like another huge upset was in the making.

But the Spaniard ripped a forehand winner to erase the set point and Rosol double-faulted two points later to give Nadal the set. With that sudden shift in momentum, Nadal rallied for a 4-6, 7-6 (6), 6-4, 6-4 victory that sent him into the third round at the All England Club.

"The difference maybe is one point," the two-time champion said. "Maybe if I lose that set point in the second set, if that forehand down the line went out, maybe (I) will be here with a loss.

"But that's the sport. That forehand was a perfect forehand for that moment."

Rosol stunned Nadal in five sets in the second round in 2012, a match that finished under the closed Centre Court roof. While Nadal insisted he was not out for revenge, the way he dug himself out of trouble and celebrated with fist pumps and shouts of "Vamos!" showed how much winning this match meant to him.

"Today is another history, another story," he said. "I needed to find the solution. Finally I did. That's the most important thing."

Maria Sharapova, the 2004 champion and fifth seed, beat Timea Bacsinszky of Switzerland 6-2, 6-1. Other seeded winners included No. 9 Angelique Kerber, No. 13 Eugenie Bouchard and No. 19 Sabine Lisicki.