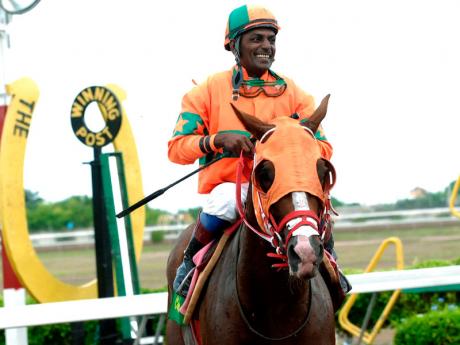 The Pick-9 had takers at Caymanas Park last Saturday and still offers $1 million, but both Super-6s were caught by astute punters.

We look at the first super-6 which commences with a two-year-old maiden special for the Eddie Black Memorial Cup over 600 metres straight.

LADY DANZA, who has run well in two races to date, is one of four horses owned by owner/trainer/breeder Lorenzo Robinson, but unlike the others, the dark bay filly by Film Director out of Bar Danza, is trained by Rudolph Hardial.

LADY DANZA, with former champion jockey Percy Williams retaining the ride, was installed a 3-5 favourite for a similar race on June 14, but hurt her chances by being slowly into stride and had to settle for second behind post-to-post winner FANTASY.

Hardial recently described LADY DANZA as a "nice filly with good ability who would have won already from a clean break". Having finished close up in her two races, the trainer is expecting her to come away in good order tomorrow and finally release the maiden certificate.

Seven three-year-olds (non winners of two) are slated to contest the second race over 1820 metres, including top contenders UNBREAKABLE, SPARKLING MICHAELA and BIG BAD LINKS. The Lance Richards-trained filly SPARKLING MICHAELA, who was fourth in the April 26 Bigga Oaks and led for a long way in the Lotto Classic, will be hard to beat with only 50.0kg and Percy Williams up.

I'M ALL WRIGHT, who found KOBALT too hot to handle on a $325,000 claiming tag when sprinting on June 14, is back among her peers ($250,000 claiming) in the third race over 1500 metres and with champion jockey Dane Nelson now taking the ride from the convenient mark of 52.0kg, should snap the winning streak of up in class FEARLESS BABE and SUPEM AGO HAPPEN in a field of nine.

In recent months, I'M ALL WRIGHT has finished second to INSANE BOLT and I'VE BEEN CHOSEN over varied trips, which speaks volumes for her chances in present company.

The fourth race to be contested by 12 maiden three-year-olds over the straight five course. Both CHEERS (Aaron Chatrie up) and the Gresford Smith-trained filly EXCEPTIONAL SLEW (working well, Paul Francis up) are drawn alongside each other on the stands' side and it should come down to these two. CHEERS showed good speed when caught on the line by DANOS LA PAZ over 1100 metres on June 7 and is given the edge by virtue of that performance.

The last two races in the first Super-6 should be won by the DaCosta-trained STRIKING DISTANCE (working well) with Cardenas up and consistent PRINCE O'SHAUN with Nelson up in the sixth over the straight.