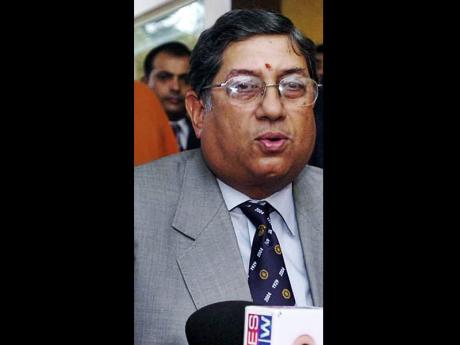 Indian industrialist Narayanaswami Srinivasan was elected chairman of the International Cricket Council (ICC) yesterday, declaring he will leave "no stone unturned" in strengthening a sport tarnished by recent match-fixing revelations.

Srinivasan remains barred by the Indian Supreme Court from carrying out his duties as president of the Board of Control for Cricket in India during an investigation of the Indian Premier League (IPL) team headed by his son-in-law.

He has been named among 13 "persons of interest" whom investigators wish to question over possible corruption in the IPL.

The Supreme Court made clear that the investigation of the Chennai Super Kings should not affect Srinivasan's candidacy for the ICC role.

His election was confirmed by the board of the ICC, meeting in Melbourne, after 52 members of the full council signed off major changes to the world body's structure.

"It is an honour to be confirmed as the chairman of the International Cricket Council," Srinivasan said. "I will leave no stone unturned in trying to strengthen the pillars and foundations of our sport, both on and off the field.

"I want to ensure that cricket retains and grows its popularity and that the ICC plays a leading role in this global growth."

"For this to be achieved, we all need to work hard to develop local talent in our countries," he said. "Naturally, there will be more support to those who first show they can help themselves."

Srinivasan later told a news conference at the Melbourne Cricket Ground that criticism of his appointment was "unfair".

"I believe that some of the criticism is unfair to me and it's not well founded," he said. "One must judge me by results."

Srinivasan disputed suggestions that cricket had been damaged by recent corruption allegations.

"I can't accept that cricket has an image problem," he said. "There may have been some instances. Rare instances, few and far between."

The structural changes - approved yesterday - flow from a board resolution taken on February 8 and finalised on April 10 which see virtual control of world cricket handed to India, England and Australia.

An executive committee will be formed, reporting to the ICC board, and will initially be headed by Cricket Australia chairman Wally Edwards. Giles Clarke of the England and Wales Cricket Board will continue to head the Finance and Commercial Affairs Committee.

Mustafa Kamal of Bangladesh was elected as the 11th president of the ICC.