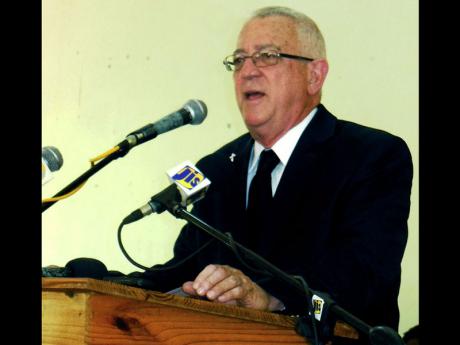 The Denbigh High School in Clarendon celebrated its most recent academic achievement in fine style as it proudly presented its 2014 cohort of graduates at a ceremony held on the school grounds last Tuesday afternoon.

Just recently, Denbigh High was listed as the top school among all the upgraded high schools in Jamaica with the highest passes at the Caribbean Advanced Proficiency Examinations (CAPE) level. According to Educatejamaica.com, Denbigh High led the way for non-traditional high schools to finish in the top 30 with 64.5 per cent of its students getting at least grade three in two or more CAPE units.

Principal Kasan Troupe, in her 2013/2014 school year report, highlighted the myriad of achievements the school accomplished in the past year. These included being the number one school among the upgraded high schools in the CSEC examinations and the number-one sixth-form programme within the upgraded high schools category island wide. There was massive applause when she mentioned 100 per cent passes in six CAPE subjects last school year.

The principal reported on the implementation of a virtual learning environment, which is an online school for students that can be accessed from anywhere. "Denbigh is now online. It complements what we do in the classroom, so whatever we do, we put it online so the students can practise. They can also communicate with their teachers. Our teachers develop the content such as quizzes and other material to enrich our programme of education," she explained.

"We are no longer just academically focused; we have broadened and expanded our horizon. We embrace the concept of multiple intelligences," she said, adding that the school had added new sporting disciplines such as basketball and volleyball to its co-curricular activities.

Minister of Education Ronald Thwaites, who was guest speaker at the graduation, said he was happy he had been invited to Denbigh to deliver the keynote address. He said was very impressed with the many achievements the school had raked in over the last few years and heaped praises on the staff, led by the principal, for the tremendous work they were doing and the sacrifices they made to help their students excel academically.

Chairman of the school board, Aldo Brown, urged the parents to support their children to get further education and training in order to be competitive and successful in their chosen disciplines "Your support will ensure your children become independent and productive citizens who will contribute positively to building a better Jamaica."

Troupe had high commendations for her staff, who she described as "competent and qualified teachers".

"We believe in the collective intelligences that we have on staff, and that is demonstrated in the many number ones we are celebrating here today. We are very, very proud of our achievements. We are no longer that buggy car that no one wanted to come into. We are the Benz!" she exclaimed. She added that through partnership, the school was able to reap success as no great institution can make it on their own. She said Denbigh High would continue to "soar to greater heights through home-school partnership".