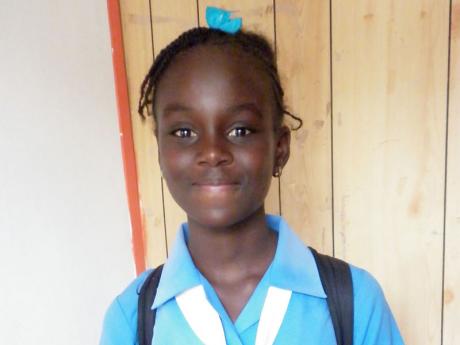 There were mixed reactions among family members when they got the news that Yanique Burrell had passed her Grade Six Achievement Test (GSAT) for Central High School.

Yanique is one of the students who sat the GSAT at the May Pen Primary School in Clarendon. She is said to be a well-mannered student who does her work and participates in class activities. So when she found out she didn't get into Denbigh High School (her school of choice), she was a little disappointed. "I feel good to know that I passed my exam, but I never wanted to go to Central," she said. Central High is one of the newly upgraded high schools in Clarendon that has been doing extremely well in academics as well as in co-curricular activities.

Yanique's mother, Desreen Burrell, said: "It was not the school I was looking for, but I am still happy she passed Central is not a bad school."

While pointing out that her favourite subject is mathematics, Yanique conceded that she had to put in extra work for social studies and science.

According to her mother, Yanique is always actively engaged in the classroom. She said her teachers have always had high commendations for her and encouraged her to continue to do well.

In the latter part of the school term, Yanique said she became nervous. Overwhelmed by anxiety and nervousness the day before the GSAT, she sought comfort from her mother to help her calm the fears that had built up prior to the examination. Burrell pointed out that her daughter didn't have a problem with the GSAT mock exams a few weeks before, but she seemed to have panicked when she realised it was time to write the external paper.

Despite not having passed for the school of her choice, Yanique said she is looking forward to the high school experience to be had at the Central High School.