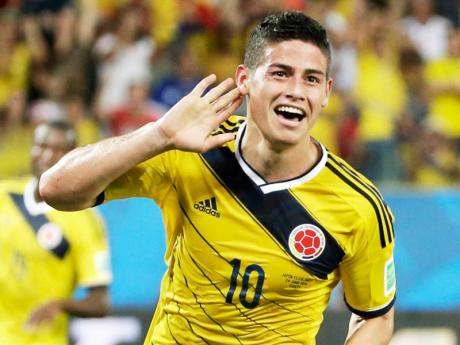 RIO DE JANEIRO, Brazil:Things could hardly be going better for Colombia ahead of today's round of 16 clash against Uruguay.

Even allowing for the absence at this tournament of its star forward, the injured Radamel Falcao, Colombia will be the favourites to reach the quarter-finals.

Rodriguez, who engineered the opening two victories over Greece and Ivory Coast but was rested for the first half of a 4-1 win over Japan, will return to the starting line-up.

For Uruguay, the loss of Suarez will be damaging - both technically and psychologically. His two goals in the 2-1 victory over England in Group D propelled Uruguay toward to the knockout stage and his presence in the squad as a proven match winner did much for their confidence.

By contrast, strike partner Edinson Cavani has been in mediocre form so far at the tournament and will need to step up to the plate against Colombia. Playmaker Diego Forlan, named the best player of the 2010 World Cup, could be Uruguay's best hope of a victory.