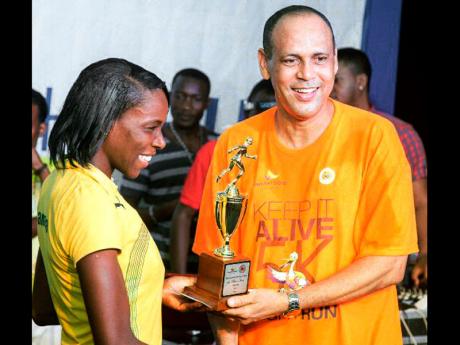 The inaugural Guardian Group/UHWI 'Keep it Alive' 5K Night Run was a huge success, recording numbers of over 6,000 participants, including corporate groups, individual and group sports enthu-siasts, as well as persons who just wanted to support the cause.

According to race director Alan Beckford, it is the first in Jamaica's history of 5Ks that an inaugural event has registered so many participants.

The event was staged by Guardian Life Limited (GLL) in partnership with the University Hospital of the West Indies (UHWI) to raise funds for the UHWI and Victoria Jubilee Hospital. Proceeds from the run will also benefit a number of other charities in several communities across the island in collaboration with Kiwanis, Rotary, Lions, and Optimist clubs.

"The service clubs played a key role in mobilising support for the event and was also instrumental in raising funds towards the cause," said Eric Hosin, president of GLL.

The 'Keep It Alive' 5K run, which is the first night run to be held in New Kingston, saw the thousands of participants - runners, walkers and wheelers - journeying under the stars in the heart of New Kingston; starting on Trafalgar Road in the vicinity of the Guardian Life building, heading east on Lady Musgrave Road on to Old Hope Road; west onto Oxford Road; north on to Knutsford Boulevard; west onto Trafalgar Road; taking a U-turn in the vicinity of the YMCA and then heading east on Trafalgar Road where the race ended on Musgrave Avenue at the Guardian Life parking lot.

After 'working up a sweat' on the route, over 40 persons across the various race categories were rewarded with trophies, cash prizes, gift baskets, and gadgets for their efforts.

"The 5K Committee, which is made up of representatives from Guardian Life and UHWI, is extremely pleased with the outcome of our first 5K event, and we will be working harder to make next year's staging even better," promised Hosin.