Traditional Prince to rebound in feature 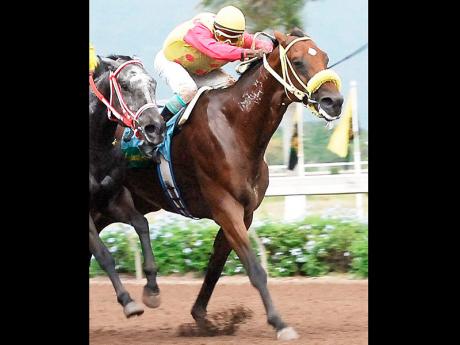 Open allowance horses take the spotlight at Caymanas Park today when seven of them line up in the ninth race over 1100 metres, among them four winners in recent weeks.

They include EL PODEROSO, a narrow winner of the Thoroughbred Hall of Fame Stakes Trophy over 1200 metres on June 7; TRADITIONAL PRINCE, who won easily over the straight on May 7 and came back to finish third to EL PODEROSO in the Hall of Fame Trophy; and LADYLIKE, who beat a good field of overnight allowance horses in the G.A. 'Sarge' Bucknor Memorial Cup over the straight on May 31.

EDISON, the mount of champion jockey Dane Nelson also won over the straight in fast time on April 30 when having EL PODEROSO behind in third, while DOUBLE THE HONEY, stable-companion RIO COBRE, and UNCLE TAF have all won races this season.

This makes for a highly competitive race, but from all indications, EL PODEROSO and TRADITIONAL PRINCE, to be ridden by former champion jockeys Percy Williams and Shane Ellis, respectively, will carry the bulk of the betting.

Both won at the open allowance level last time out, the Philip Feanny-trained American horse EL PODEROSO holding on by a short head from GO GO YVONNE in the Hall of Fame Trophy and TRADITIONAL PRINCE from the Patrick Lynch stables scoring by three lengths over the straight some weeks ago.

With the Wayne DaCosta-trained DOUBLE THE HONEY sure to lead from the convenient mark of 52.0kg ahead of EL PODEROSO and RIO COBRE, this could set up the race for the consistent TRADITIONAL PRINCE in the closing stages.

DOUBLE THE HONEY should still be in front passing the furlong pole, and although topweight EL PODEROSO should be looming large at this stage, TRADITIONAL PRINCE given a more patient ride from Shane Ellis, along with the run on sprinter EDISON, will be closing strongly at this stage. I am expecting TRADITIONAL PRINCE to get up in time ahead of EL PODEROSO, now 2.0kg worse off with his old rival from their June 7 encounter.

Elsewhere on the back-to-back 10-race programme which continues with a Sunday meet, LADY DANZA, who proved competitive in her two races so far, will now prove hard to beat in the opening two-year-old maiden race for the Eddie Black Memorial Cup over 600 metres straight.

The dark bay filly from the stables of Rudolph Hardial has the best form to recommend in the field of six, having chased home the speed FANTASY at the 3-5 favourite over this trip on June 14. With Percy Williams retaining the ride, the Film Director - Bar Danza offspring should make no mistake.

I also like down-in-class I'M ALL WRIGHT under champion jockey Dane Nelson to win the third race over 1500 metres; STRIKING DISTANCE in the fifth; consistent PRINCE O'SHAUN (Nelson up) to stave off CRUCIAL APPEAL in the sixth; and PRINCE KAYTON in the eighth.