Hide sex and kids will find it 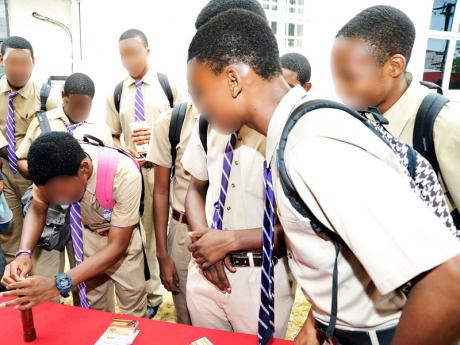 Students learning how to properly roll on a condom during activities to mark Caribbean Regional HIV/AIDS Testing Day 2013. - File
1
2

Irony had a good month in June with the forced firing and rehiring of Brendan Bain followed by the mental picture of Carolyn Gomes, hoisted on her own petard, flouncing out of a Jamaicans for Justice for Some (JFJFS) boardroom having not got her own way for the first time at last.

So, what goes around does eventually come around.

The sun comes up; the sun goes down.

The hands on the clock go round and round.

I just got up now I gotta lay down.

Life gets tee-jus don't it?

In her new incarnation as executive director of equally shadowy Caribbean Vulnerable Communities Coalition (CVC), she tried her standard holier-than-thou attitude and sneering tone on senior Jamaican journalists, insulting Gary Spaulding and Karyl Walker, both outstanding professionals tested by the fires of many public events. Understandably, both, no doubt reflecting on their long and faithful service to Jamaica from less lofty and less lucrative posts than the one enjoyed by Mrs Gomes, intemperately stormed out of the farce.

These seasoned professionals were greeted with open hostility from an obviously piqued Gomes who actually said journalists should "listen" and "not talk" during press conferences. Shades of Milton Samuda!

Laziest dawg that ever was born.

He's howlin 'cause he's sitting on a thorn

and he's too durn lazy to move over.

Mrs Gomes was quoted as saying: "CVC is founded on the principle that all human beings are born free and equal in dignity and rights. We [are] fighting for the rights of ... vulnerable groups to be heard, to participate as full citizens and to be treated with dignity and respect ... ." Unless, of course, one gives independent expert evidence which offends one of these 'vulnerable groups' for whom CVC is fighting. That human being does NOT appear 'born free'; has NO RIGHT 'to be heard'; or 'to participate as [a} full citizen'.

Old brown mule she must be sick.

Stuck her in the rump with a pin on a stick.

Humped her back but she sure didn't kick.

All sides to this silly 'gay-rights' squabble must understand the key to progress is tolerance. It's not enough for so-called gay lobbyists to ask for tolerance, they must be equally tolerant of opposing viewpoints, especially those entrenched views known to have been handed down from generation to generation over millennia. These antiquated beliefs won't be easily changed and 'progressive' supporters of the principle 'all human rights must be enjoyed by all humans' need to appreciate and tolerate the difficulty conservatives are having grasping new trends.

I open the door and the flies swarm in.

I shut the door and I'm sweating again.

I move too fast and I bruise my shin.

It's just one darn thing after another.

Despite the Nixonian denial, "We are not a gay lobby", it's clear that CVC is very much a gay lobby (among other things). The word 'lobby' isn't a dirty word; it only means fighting for

the rights of your constituents, including gays, by any means necessary and legitimate, including networking with powerful possible change agents. Too much political correctness usually forces one to constantly defend irrelevances. Life's tedious enough already.

Water
in the well's getting lower and
lower.

Ain't had a bath in (whoo)
six months or more.

But I've heard
it said (and it's true I'm
sure)

too much bathing weakens
ya.

Another thing: This
hackneyed phrase, 'gay rights', is a misnomer. What we should all be
fighting for is human rights for all humans, including gays. Only those
prepared to publicly admit they don't consider gays to be 'human' in the
same way the Ku Klux Klan doesn't consider 'niggers' to be humans will
get my attention when they otherwise incongruously submit that only
heterosexuals have the right to love; marry; adopt children or become
parents by modern scientific means, including surrogacy; own community
property; and be treated as next of kin in appropriate
circumstances.

Once
you admit that gays are human, all else falls into place. You mightn't
like the idea of gay marriage; it might fill you with revulsion. In that
case (which is your entitlement), may I suggest you don't get married
to any homosexual. However, if two homosexuals want to marry each other,
please stay out of their way.

Homosexuality has
existed in the world as an alternative attraction (NOT 'lifestyle')
since the dawn of time. It's been with us as long as heterosexuality and
will be with us until the hyped Second Coming. Those members of the
holier-than-thou clan who don't want this reality explained to children
of all ages in a controlled educational, scientific environment are so
full of it that they don't even realise that sticking their heads in the
sand leaves their respective rear ends exposed and primed for a
homosexual assault. It leaves their children similarly
exposed.

Learn this. If 10 per cent of the general
population (a conservative number) are homosexual, 10 per cent of
children of all ages, in all schools, are homosexual. Are they to grow
up without their strange (according to society) attraction being
explained to them in an environment in which they can't be singled out
for ridicule and can actually learn something about
themselves?

What about heterosexual children? Are they
to continue the 'bun byman' tradition taught on Jamaica's street
corners without even knowing what it means? Or should they also be
instructed about homosexuality in a controlled environment by trained
professionals in circumstances where they don't have to feel embarrassed
or be called 'queer' for wanting the information?

All
members of the holier-than-thou sect still believing that homosexuality
shouldn't be in the school sex-education syllabus because children need
to be 'protected' from the truth, I hope you're equally earnest in your
campaign to protect these children from information disseminated on the
Internet, etc., not in quite as professional a manner as it would be in
school. Be careful what you ask
for.

Rat's
gnawing on the cupboard
door.

Fool's been at it for a month
or more.

When he gets in he's
gonna to be awful sore.

There ain't
a dang thing in
there.

To those who use
the silly term 'age-appropriate', that might've been useful when I was a
boy with no TV. Then, one TV station in black and white; no Internet;
no cable; no global information technology. Today, it's just plain
stupidity. Let me guarantee these religion-based nuts that, in Jamaican
schools today, boys are having sex with girls; boys are having sex with
boys; girls are having sex with girls; girls are inserting sex toys in
their female friends' vaginas; every trick in the book seen on cable TV;
the Internet; and smartphones are being tried in school from as early
as five years old. Ignore THAT at your peril.

Instead of praising children's homes for
initiatives (including independent fundraising) establishing compassion
for their children and reality recognition, everybody has withered like
'shame old lady' under the public's backward backlash. Public
authorities are scurrying about pointing fingers at each other.
Irrelevant regulations are being deliberately misinterpreted or
selectively relied on to crucify children's homes for teaching sex in
sex-education classes.

Lisa, I expect better (and
braver) from you. Homes must seek ministry approval for curriculum
changes. There's been no change. 'Curriculum', in my dictionary, is "the
subjects that are included in a course of study or taught in a school
...", for example, sex education.

Grief
and misery, pain and woe;

debts
and taxes and so it goes.

Now it
seems I'm getting a cold in the
nose.

Life gets tee-jus don't
it?

Life
Gets Tee-jus (Tedious), Don't It? was written and first
recorded in the 1920s by forgotten but influential early country/western
recording artiste Carson Robison. It's a song about the futility of
trying to change the world. The world is what it is. It's been so for
millennia. It won't change. Will you?

Gordon Robinson is an attorney-at-law. Email
feedback to
columns@gleanerjm.com.