Lagarde and our laggard economy 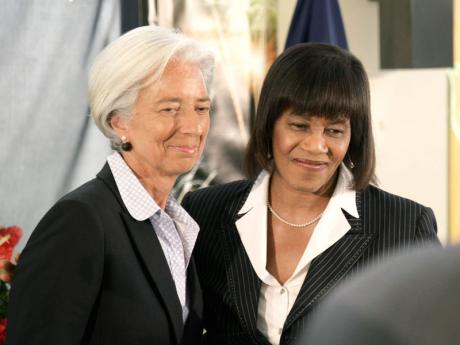 The high-powered managing director of the world's most influential multilateral institution, Christine Lagarde, has visited Jamaica amid a swirling controversy over its exchange rate and fresh concerns over Jamaica's growth prospects.

The International Monetary Fund (IMF) just last weekend issued a 122-page report on the Jamaican economy in which the Government was praised for its bold steps in economic reform, including the devaluation of the Jamaican dollar. But the IMF was not unmindful of local disgust over our sliding dollar, noting that "the real depreciation of the exchange rate since 2012 opens up an essential but contentious path to restoring Jamaican competitiveness".

It observes that this devaluation "has been highly unpopular domestically", and "there has been little apparent recognition of the job-creating benefits of currency adjustment". Except among persons such as economist Damien King and non-economist banker Aubyn Hill, who was last week named as head of Opposition Leader Andrew Holness' Council of Economic Advisers. Hill, before last week, was a bold voice in the wilderness talking up the benefits of devaluation and shouting down arguments of those panicking over devaluation.

In an article in the Financial Gleaner of June 14 last year when our dollar crossed that psychologically important barrier of J$100:US$1, Hill chastised those who were alarmed: "Our leaders kept an inflated and perennially overvalued currency while they and their largely self-serving sycophants kept making the argument that a depreciating dollar which reflects the market reality of an ... underproductive economy that exports little would hurt the poor." Hill went on to say in his stern rebuke of devaluation critics - "populists" pandering to political expediency - that "the argument that the continuing depreciation of the Jamaican dollar will only hurt the poor and manufacturers almost implies that in your current situation, the depreciation of the currency is largely in the hands of the Bank of Jamaica".

This is not the kind of tune that Aubyn can now sing to Andrew Holness. It certainly would be regarded as cacophony to Opposition Spokesman on Finance Audley Shaw, who has led a creditable and challenging campaign against continued devaluation in our context of a high import dependent, open and structurally lopsided economy. In his Budget presentation, Shaw made an excellent contribution to rational discourse on the exchange rate, drawing on scholarly sources and empirical data.

Shaw had promised to take his case to no less a person than Lagarde when he met her last Friday at Holness' offices. He would have taken his case to not only the most powerful person - for she has more say over the Jamaican economy than the Jamaican State - but to someone best disposed to give him a serious listening. I hope he had been reading her speeches over the last year and a half.

Christine Lagarde is the most progressive-minded person who has ever led the IMF. We might say she is a mere product of history and that the chastening of the Fund since the global recession of 2008, coupled with the fallout from its disastrous involvement in the Asian financial meltdown of the mid-1990s, has humbled her and her institution and has forced her to rethink IMF dogmas. If you have been following Lagarde's pronouncements over the last year especially, you would have been noticing the challenges she herself has posed to neo-liberal orthodoxy.

Lagarde is an avant-garde thinker who keeps abreast of the best thinking in development economics. You can't read her speeches and not realise that she is up to date on her reading. Lagarde has emerged as a major international voice against growing inequality and concentration of wealth - ironically and stunningly, coming from an IMF head.

In delivering the Dimbleby lecture in London in February ('A New Multilateralism for the 21st Century'), she confessed: "Let me be frank: In the past economists have underestimated the importance of inequality. They have focused on economic growth, on the size of the pie rather than its distribution. Today we are more keenly aware of the damage done by inequality. Put simply, a severely skewed income distribution harms the pace and sustainability of growth over the longer term. It leads to an economy of exclusion and a wasteland of discarded potential."

This is the language of people like Dani Rodrik, Jeffrey Sachs, Joseph Stiglitz, Paul Krugman, Nancy Birdsall and other leading progressive development economists. It is amazing coming from an IMF head. It's a sea change in thinking, if not acting. Lagarde has now been championing inclusive growth and in speech after speech she has been stressing that theme.

On May 26, Lagarde was in London addressing the conference on 'Inclusive Capitalism'. It was another first-class presentation. In that speech, she spoke the way Michael Manley used to speak: "The 85 richest people in the world, who could fit into a single London double-decker, control as much wealth as the poorest half of the global population - that is 3.5 billion." She went further: "In the US, the share of income taken home by the top one per cent more than doubled since the 1980s, returning to where they were on the eve of the Great Depression ... . With facts like these, it is no wonder that rising inequality has risen to the top of the agenda - not only among groups normally focused on social justice, but also increasingly among politicians, central bankers and business leaders." Except among our intellectually backward middle class in Jamaica where prominent people still see issues of equality, redistribution and social inclusion as growth-inhibiting and 'socialist'.

These issues are not unrelated to the growth agenda. They are integral to it. And I hope some of our technocrats and politicians were au fait with Lagarde's own thinking and challenged her during her visit about the incoherence between that thinking and IMF policies imposed on us. We cannot just take IMF prescriptions without questioning and intellectual challenge.

Lagarde noted in that speech that "disparity brings division. The principles of solidarity and reciprocity that bind societies together are more likely to erode in excessively unequal societies. History also teaches us that democracy begins to fray at the edges once political battles separate the haves against the have-nots." That's Christine Lagarde speaking, not some leftist. We must use her words against policies imposed by her own institution which deepen inequality and poverty. We must challenge them rather than acquiesce to runaway neo-liberalism.

For example, we have so eagerly and worshipfully embraced fiscal-rule legislation - both parties are in unison on this - while not much attention has been focused on exception clauses to see whether we have enough flexibility. It is not just natural disasters that provide adequate justification to deviate from strict fiscal rules. We have to factor in global recessions, economic downturns, global market instability and social instability. Europe has tossed aside fiscal rules when faced with certain constraints. Their Stability and Growth Pact has been honoured in the breach.

It was interesting that the director of the
IMF's European Department earlier this month, in a speech in Brussels,
criticised strict fiscal rules for lacking flexibility: "The rules
implied pro-cyclicality and politically difficult tightening at the
worst possible time." We in Jamaica need some counter-cyclical
strategies (stimulus) to grow the economy, as Andrew Holness has been
emphasising, and contrary to economic fundamentalist Damien King (whom I
regard highly).

Our minister of finance and his
technocrats need to know that, yes, fiscal conservatism and austerity
are important, but if growth and social cohesion are not to be
sacrificed, our IMF programme has to go beyond PATH-type social welfare
involving the most vulnerable.

Christine Lagarde's
head is in the right place. I hope we have made use of her
ears.

Ian Boyne is a veteran journalist working with
the Jamaica Information Service. Email feedback to
columns@gleanerjm.com.