The temerity of IMF's Lagarde 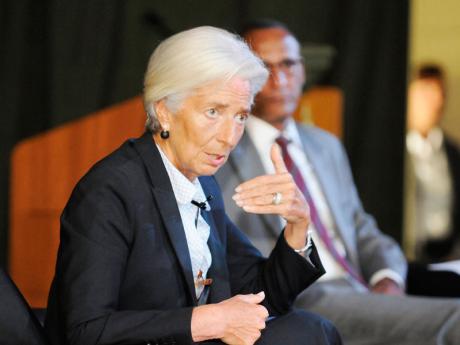 IMF Managing Director Christine Lagarde answers questions after presenting a lecture at the University of the West Indies, Mona, last Friday. To her left is economist and UWI lecturer Damien King. At an earlier briefing with journalists, she only took two questions. - Gladstone Taylor/Photographer

There is growing concern about the movement of the Jamaican dollar. It has moved from J$99.33 to US$1 at the start of the International Monetary Fund (IMF) agreement in May of last year to J$112.14 at the end of trading Friday, June 27. Audley Shaw, opposition spokesman on finance, says the IMF wants it to go to J$120:US$1.

The Opposition has declared that it plans to complain to Christine Lagarde about the dollar slide when she visits the island. I wish them luck, because the IMF boss has declared that she will not entertain questions and will only make a statement. (She eventually accommodated all of two questions. Whoopee!) My few friends often express concern about my negative feelings towards successive leaders in this country. It is because I think it is their corrupt and profligate ways that have resulted in the kind of mendicancy that could cause the IMF head to dish out this kind of impertinence.

Not long ago, she visited Australia. She took nine questions from the press. She went to England and was available to the press - even commenting on unrelated matters. She went to the US and her interview has been circulated to 500 media organisations. Now, after forcing unpalatable policies down our throats until our bellies are now brushing our backs, we are told to 'shut up and listen'. And to add to my frustration, my editor will not print what I really want to say.

Devaluation is the decision to reduce the value of a currency in a fixed exchange rate. The rationale is that exports become cheaper to foreign buyers and thus provide a boost for local demand. Higher levels of export can lead to an improvement in the current account deficit. Then higher exports and aggregate demand can lead to higher rates of economic growth. Well, that's what first-year students are told during their first week at university.

There is much more to devaluation. A more sophisticated analysis will reveal that in a country like ours that is so import dependent, imports become more expensive, there is demand pull inflation and exporters have less incentive to cut costs because they can rely on the devaluation to improve competitiveness.

But, to benefit from devaluation, we have to have something to export. Where is that going to come from? Our Blue Mountain coffee is the best in the world. But only a fraction of that area is under coffee. The rest is just bush. Our best agricultural lands are being sacrificed to sprawling housing developments. Small and medium-size businesses are struggling to keep their doors open primarily because of IMF policies.

In the 1980s, many African nations - strapped for cash - went to the IMF. This relationship led to the most distressing period in modern African history. The Nigerian middle class saw their savings disappear before their eyes. Many migrated. Those that remained have still not recovered fully from those policies, which included devaluation. Today, with their GDP in the 7%+ region, the IMF is still suggesting devaluation.

In Malawi, a 71 per cent devaluation of their currency in 1994 diminished the dollar value of total commercial bank credit by 60 per cent. Mexico suffered also when the peso was devalued in 1994. It transmitted a shock to the asset side of bank balance sheets, resulting in a financial-sector crisis that curtailed lending for development. If one looks at Vietnam, or Sri Lanka, the experience is the same. In fact, anywhere poor coloured people come into contact with the IMF, the experience is the same.

So, with this 'shut-up-and-listen' approach, could it be that these Bretton Woods bullies are unaware of the pain and poverty they are causing? I think not. As far back as 1998, a World Bank report 'The Road To Recovery' observed that the bad-loan problem of most poor countries is largely attributed to currency depreciations. Incredibly, since that report, more poor countries have been put through this meat grinder called 'corrective devaluations' as soon as there is any negative move in inflation.

The Bretton Woods family consists of well-educated, politically savvy diplomats. Have Mrs Simpson Miller and her team ever wondered whether there could be an ulterior motive for insisting on these disastrous policies despite their failures?

Maybe I could help. These policies weaken the domestic currency. At the same time, it strengthens the currency of those with whom we trade. We are getting less for what we are selling abroad and paying more for what we are buying abroad. Then there is privatisation, something else the IMF wants. Now since our banks are unable to finance stock buyouts by domestic citizens, 'privatisation' has become synonymous with 'foreign ownership'.

Africa is losing all of its prized assets to the friends of Bretton Woods whose currencies, hardened and strengthened by this weakening process of poor countries, managed by the IMF, can make these purchases at fire-sale prices.

Maybe if we assumed a position of delayed genuflection, Christine Lagarde would explain how a businessman plans for the future in face of a dollar destined to decline significantly in the near future? Or how does one respond to a scared international investor who is having second thoughts? What does one say to a farmer who sees farm inputs increasing. Or a high-school graduate who is no longer able to contemplate further studies? For every one per cent devaluation, our debt increases by J$9 billion.

There is no monetary logicality for the devaluation of the Jamaican dollar. Further devaluation is contrary to sound economic judgement. This policy of devaluation is benefiting developed countries. Privatisation is facilitating foreign acquisition of the most valuable assets in poor countries.

Declining prices of imports from poor countries also aids inflation policies in developed countries. Also, when IMF-inspired deteriorating industry and trade liberalisation opens the markets of poor countries to global enterprise, it works to the advantage of industrial nations.

One IMF representative attempted to comfort us recently by assuring us that there is 'light at the end of the tunnel'. I think that person has tunnel vision.