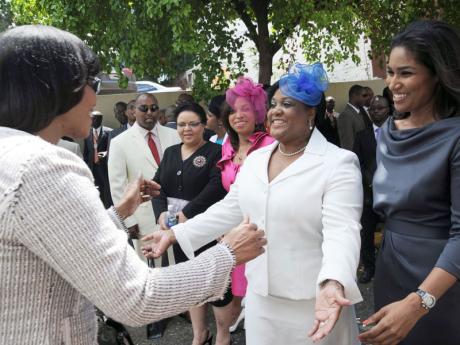 Senator Imani Duncan-Price recently argued in Jamaica's Parliament for a more equal gender mix in representational politics. She felt that this could be achieved with the introduction of a quota-based system to ensure that not more than 60 per cent nor less than 40 per cent of any one gender is allowed to sit in Gordon House at any given time.

The system was said to be working in some countries, so presumably all the ponderous operational details have already been invented and could readily be imported here.

The good senator should first let the rest of us know, however, whether there are women in this country who are being prevented from entering representational politics because of their gender. If women are, in fact, free to enter the political arena but are not so doing out of choice, it would seem eminently more sensible for believers in the cause to mount a public campaign urging them to come forward and offer themselves.

To be effective, the campaign should highlight the advances attributable to the greater presence of women in Parliament of those countries operating the gender quota system and the basis of any expectation that similar benefits are likely to accrue in the Jamaican context should we decide to move in that direction.

While I have no doubt that women have a capacity to make a difference in the corridors of power and have, in fact, been doing so in this country for many years - in media, in education, in the auditor general's office, in the office of the Jamaica Social Investment Fund, to name a few - I am equally convinced that this is not at all a numbers game. If the women entering politics are going to be content with merely 'running with it', not wishing to upset the proverbial apple cart, not willing to risk falling out of line, always looking over their shoulders to the next general election, what would be the point of having more of them in Parliament?

From my own observation, the political agenda of the Jamaican female parliamentarians (except for one notable exception) has been, up to now, largely indistinguishable from that of her male counterparts. MP Heather Robinson's decision to give up her parliamentary seat some years ago rather than "hug up gunmen" was essentially ignored by her parliamentary colleagues of both genders.

It was a move that could have made a significant difference in the way we would evolve as a nation had the women of Parliament chosen to unite at that moment on this critical issue which remains a major cause for concern to this day. But there was no cheering from any corner of Gordon House, for a member of the team had let the side down. A pariah, she was allowed to go quietly even as another woman was being ushered into the position.

Our female prime minister no doubt means well. She has recognised a need to "balance people's lives" and has made an election promise so to do. However, if what she meant was to improve the social and economic well-being of the most deprived among us, she has so far failed to deliver, in any decisive way, anything beyond what has already been accomplished by her predecessors.

It was under a male prime minister that free secondary education was introduced to the children of poor people in the 1950s, that the National Insurance Scheme was introduced in the 1960s, that the National Housing Trust sites/services housing solutions and a raft of social legislation came into being in the '70s, that HEART Trust/NTA and the attempted beautification of public spaces occurred in the '80s, and that in the '90s, the common-law union of prime ministerial pension to the incumbent's salary became a reality, a decade before its legal ratification.

Mrs Duncan-Price would do well to remind the prime minister of her yet-unfulfilled election promise. She would have struck a more potent blow for female representational equality if she can convince her to adopt a more caring political agenda. She could begin by resurrecting the stillborn Values and Attitudes Programme that was conceived in 1994. She should ensure that, on this occasion, the campaign begins in earnest in the teachers' colleges and infant/basic schools. She would be doing this in the full knowledge that results would probably earn her no new votes for the next general election but would put the country on a far better footing for generations to come.

Then to be addressed are the dilapidated conditions in which people live in some areas of this country - refer to the Saturday Gleaner report of March 8, 2014 ('Senior citizen and family living in mess') or of the Sunday Observer of June 1, 2014 ('Living like a hog') or the pictures of frightening decay that so frequently appear in the daily television news.

Then there are the abandoned vacant lots all over the inner cities (check Maxfield Avenue), some of which could be acquired and rehabilitated as parks to provide playing space for children living in overcrowded situations. All of these would go a long way in reducing the level of anger/violence in the society and could be readily funded by a reordering of our priorities.

Balancing people's lives cannot be spoken into existence. It requires commitment, a sense of purpose, a renouncement of corruption and, most important, a willingness to look beyond the next elections. Until I see the women of Parliament collectively and individually demonstrating these ideals in the pursuit of more sustainable national development, I will continue to greet any gender-affirmative action plan with much yawning, yawning, yawning.

Olive Nelson is a chartered accountant. Email feedback to columns@gleanerjm.com and olivescottn@hotmail.com.