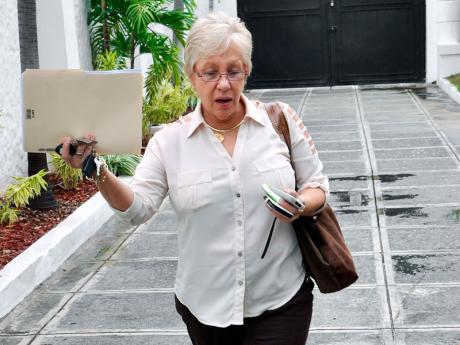 Carolyn Gomes, executive director of Caribbean Vulnerable Communities Coalition, heads to a press briefing at the Hotel Four Seasons on the outskirts of New Kingston on June 19. Gomes and JFJ, which she once led, have come under fire for a sex-ed course conducted in six children's homes. - Jermaine Barnaby/Photographer

Let's start at the beginning and not the end. The recent discovery of the unauthorised controversial insertion of sex education into the curriculum of six privately run child-care institutions is about the welfare of children and not the axis of a war on 'buggs'.

My concern is that minors, and in particular, those hypervulnerable ones in state care, were exposed to material that was not approved and that children below the age of consent, one as young as 11, were taught in a fashion that breached the Children's Homes Regulations, 2007 and possibly other child-protection laws.

Children are, even under the best of circumstances and with the best of parental resources, extremely delicate, and one or two false moves can make or break them. Last week, as a result of my column, someone went to great pains to challenge my argument that children are bred and not simply genetic. Of course, I suspected that he had an 'agender', but in our hearts, even without the research, we know that children are mostly what we put in.

That is why children of sportsmen and women tend to have an interest in sport, professionals generally have professional children, and, sad to say, those who were abused and deprived of love are likely to replicate that behaviour as adults.

Doubtless, there are exceptions to the rules, and that is the nature of human knowledge. Nonetheless, the large numbers clearly support these sociological facts. Though clichéd, children do live what they learn and learn what they live. In dealing with children?s sex and sexuality, we often experience adult-onset amnesia, forgetting about our myriad escapades while playing 'dollyhouse' and suddenly find it strange when our seven-year-old starts doing things we used to do when we were five.

Nonetheless, if there is a gay-vs-straight war going on, the combatants need to know that the battlefield and the deep trenches where it is fought must not include children. Or if it does, one must know the rules and fight fairly and within the scope of the law.

I am one of those who doesn't think that decriminalising buggery is going to turn the world gay, nor do I believe the myth that it will lead to a reduction of risky behaviour or the spread of HIV/AIDS among men who have sex with men (MSM). But children must not have sex.

As inconvenient as it might sound, parents have the right to raise their children with biases and prejudices. We can teach them that certain laws are unjust, that some people are inferior to others, that there is no God, or anything that is controversial.

However, while we can teach them certain statutes are discriminatory and should be changed, we do not have the legal right to encourage them to carry out illegal conduct. Thus, we cannot simply deny a child an education because Babylon system is teaching them foolishness. Point made.

One homophile attorney went to great pains to explain to me that the Offences Against the Person Act (OAPA) prevents gay and HIV/AIDS activists, from replicating the American-based 1990s 'Don't Bend For A Friend ... Without a Condom' campaign, in Jamaica. Section 79 of the OAPA issues a grim warning to adult males and, by inference, those in charge of children's homes. It states that any "... male person who, in public or private, ... procures or attempts to procure the commission by any male person of any act of gross indecency with another male person, shall be guilty of a misdemeanour, and ... shall be liable ... to be imprisoned for a term not exceeding two years, with or without hard labour."

Recently, on air, in an interview I was conducting, a representative of the National AIDS Committee attempted to explain how the OAPA militated against the efforts of the various activist groups as well as the 30-plus groups The Gleaner revealed exist in the phantom zone, in combating the spread of the virus. To my consternation, but clearly recognising the legal implications of not treading carefully in educating minors, he stated that laws that have to do with the age of consent and sexual behaviour of children do restrict sex education.

Thus, I am a tad disappointed that in the string below a short item in Thursday's Gleaner, a noted human-rights lawyer could comment, "Seriously, what does the OAPA have to do with the Child Care and Protection Regulations? What's going on with The Gleaner this morning? This is tabloid journalism." To him, I say, it is not tabloid journalism; rather, there is something that stinks about the whole matter. Is it purely coincidental that the institutions selected are not directly controlled by the Child Development Agency and thus not monitored vigilantly?

Finally, if the education campaign to the children was supposed to simply be benevolent and for the overall welfare and knowledge of the children, why did Jamaicans for Justice pay the homes for the use of the facilities in delivering the good message? As someone who has delivered more than 100 talks and speeches to young people, I find this strange. Indeed, it is usually the institution that has to absorb the costs or the speaker delivers the talk, pro bono. I am sincerely hoping that the money paid was simply a charitable, no-strings donation.

Oh, by the way, when the university I work at tries to recruit new students, it asks ?prominent? and influential academics to do outreach and visit schools. And, yes, we have a budget for that.